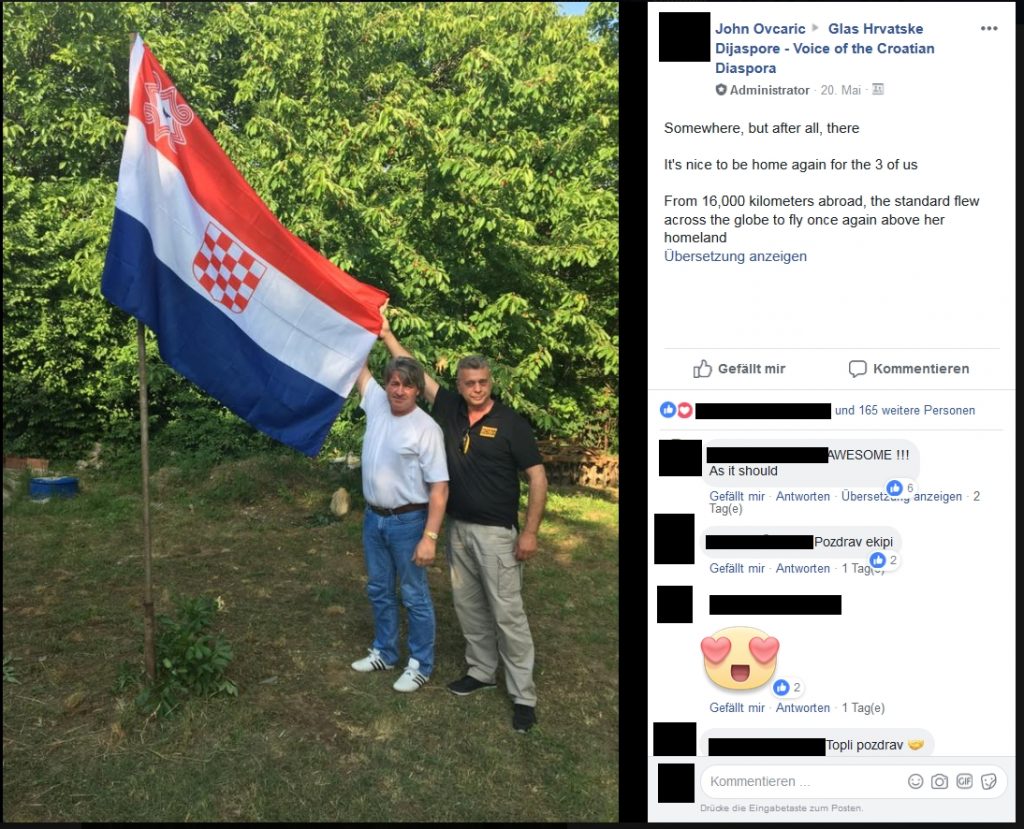 The site https://www.no-ustasa.at/ published the article on the 15th of May 2019, however apart from getting many of the dates locations and circumstances totally wrong, they also walked straight into a trap that’s been waiting in stealth for almost 8 months.

Darko and I look forward to advising you all of what will unfold shortly as a result of their Antifaux Pas, for now please enjoy reading the translation below.

The artcle can be found at https://www.no-ustasa.at/allgemein/2688/kroatisch-neofaschistische-universum-australien-melbourne/?fbclid=IwAR2Bjlg-sXv8RcR5zOWu2flBRHlVzwV3eWDdhAHUA26K61qsbFr198vRhg4

On July 7, 2018, Croatian fans showed Ustaša flags and Hitler salutes at the Men’s World Cup on Ottakringer Strasse in Vienna following the victory of the Croatian national team. In April of the same year, 14 hooligans of the “Exile Boys” group were charged by Dynamo Zagreb for re-activating (and later convicted) after celebrating the founding of the NDH state and posing with Hitler’s greetings.

These are just three of numerous examples of right-wing extremist activities of the Croatian Diaspora in Austria. As already described in some of our contributions, this diaspora can look back on a long right-wing extremist tradition, which is still maintained today, as evidenced by the annual meetings in Bleiburg / Pliberk.

The mainly Europe-wide but also worldwide activities of the extreme right-wing Croatians can be attributed mainly to the emigration and flight of nationalist Croatians. On the one hand, existing Croatian communities grew, on the other hand, new ones formed due to the flight of innumerable Croatian fascists as a result of the repression of the new Yugoslav state towards supporters and actors of the Ustaša regime.

These communities turned against Yugoslavia in 1945 and went so far as to support terrorist groups against the socialist state. To date, these mostly Catholic communities are more or less openly in the tradition of the fascist Ustaša state. These communities and associations are closely networked and bastions of anti-communism, anti-feminism and, more generally, antigalitarism. Most noteworthy is the emigration to Argentina, a country in which after 1945, Ante Pavelić, the leader of the fascist NDH state, settled. Every year, commemorative events are held in the Argentine capital for the alleged massacre of Bleiburg, as shown in relevant pictures.

The Croatian Diaspora in Canada should not be left unmentioned, as the memorial stone at Loibacher Feld / Libuško Polje was financed by former Ustaša from Canada. Here are the Croatian communities in Toronto, Vancouver, Calgary and Windsor. The façade of the Croatian Catholic Church in Vancouver, for example, leaves little room for interpretation regarding the sentiments of the faithful: a huge NDH coat of arms emblazoned as a window on the facade of the church as can be seen in the photo.

Finally, as already explained, the Croatian communities in Austria also exemplify the right to right-wing extremist tradition of this. Here to mention especially the community in Salzburg. This sprang up around Ante Pavelić’s confessor Vilim Cecelja and became a hub of the rat line and supported anti-Yugoslav terrorist organizations, as can be read in our contribution to the Croatian community in Salzburg (Link).

Croatia defended in Melbourne: actors of Croatian neo-fascism in Australia.

In this context, the clearly as a neo-fascist to be classified Croatian community Melbournes is set, which has been organizing for several decades for the “Croatian Club Melbourne” (“Australskog Hrvatskog Druztva”, short AHD).

According to the information on the homepage of the club, it was founded in 1951 by Croatian migrants. From the very beginning, the Ustaša chessboard adorned the premises of the club. In 1976, the “Hrvatski Dom” (“Croatian House”) was finally built. Until 2006, the inscription under the Ustaša coat of arms on the façade bore the inscription “Hrvatski Dom / Dr. Ante Pavelić “as can be seen in the picture. A few years ago the building was renovated, after which the name of the Ustaša leader Pavelić was removed from the façade. Despite this outward change, the tradition of the AHD remains clear: as the photo on the AHD Melbourne home page proves, a bust of Ante Pavelić was set up in the entrance area of the house. In the restaurant, which is located in the “Hrvatski Dom”, next to a picture of Pavelić hangs one of the first president of Croatia Franjo Tudjmans and one of the bishop Alojzije Stepinac. The latter picture illustrates the Catholic tradition that the nationalist Croatian diaspora feels.

In addition to weddings and cultural events, festivals and more or less controversial concerts take place in the premises of the Croatian club. Noteworthy in this context is a concert that took place in 2007 in the “Hrvatski Dom”. As anti-fascists tried to prevent a concert by the Australian offshoot of the “Blood and Honor” network and the “Southern Cross Hammerskins”, the “Croatian Club Melbourne” helped the neo-Nazis. In short, the memorial concert for the British neo-Nazi and founder of the Blood and Honor network Ian Stuard Donaldson took place on October 13, 2007 in the premises of the “Croatian Club Melbourne”. The report of “Blood and Honor” states:

“This year the Melbourne Croatia Social Club were kid enough to host the gig (no point in keeping it a secret now, it was on the National television news and in the papers and, of course, YouTube). […] The upshot was that the Croats stayed staunch and ended up telling the anti-not-so-politely where to go; another “cunning” Red plan bites them in ass again, haha … “

Another actor of the neo-fascist diaspora in Australia is the Croatian Diasporan Voice Association, which according to its own statement represents the interests of the almost 200,000 Australian Croatians and is to preserve the Croatian culture. This organizes its own cultural events and networks with like-minded people worldwide.

The logo of the organization consists among other things of the Ustaša chessboard in whose background a stylized swastika can be seen, as can be easily recognized from the screenshot.

This is similar to the “Croatian Club Melbourne”, which is a clear indication of the ideological positioning of the “Croatian Diasporan Voice”. Also in the Facebook group of the “Croatian Diasporan Voice” is made from the neo-fascist ideology no secret. The recently renamed Facebook group “UNDH – United Nationalist Democratic Croatians” counts about 3300 members and is a playground for Ustaša apology, anti-Semitism and racism. Memories from the Croatian war are shared as well as pictures of Ustaša soldiers, Ante Pavelićs and maps of Greater Croatia.

The “Croatian Diasporan Voice” is strongly anchored in the Croatian community of Melbourne and Geelongs and often organizes events in their premises. In December 2017, for the first time in the “Hrvatski Dom” a lifetime achievement award in the name of the “Croatian Diasporan Voice” was awarded to the Australian and internationally acclaimed artist Charles Billich. This awards ceremony points to the broad acceptance and recognition enjoyed by the neo-fascist Croatian community in Melbourne and beyond.

The “Croatian Diasporan Voice” last organized an event under the title “Croatia Uncensored” in the right-wing Croatian club in Geelong. On the podium sat right-wing extremist Željko Glasnović, anti-Semitic Tomislav Sunić, director of the revisionist documentary “Jasenovac – Istina” (“Jasenovac – The Truth”) Josip Jurčević and the also revisionist historian Jakov Sedlar. During the event, a supposed loss of identity and alleged communist conspiracy were chanted, which is hardly surprising given such a podium cast.

The political orientation of the football club is still clear today in that AHD Melbourne and AHD Geelong are cited as “Principal Partners” on the club’s website and on the AHD Melbourne logo on the right sleeve of the players’ jerseys. Most recently, on 26 January 2019, Melbourne Knights first team visited a joint picnic for the AHD Melbourne and Geelong in the Croatian Club Ballart on the occasion of “Australia Day”.

At the same time, Melbourne Knights’ biggest ultras group is clearly seen as neo-fascist. Swastika sprayers near the stadium and group photos with Hitler salute clearly show where the group MCF stands. Each year, the “Melbourne Knights FC” and the “Sydney Unites FC” meet for a friendly match. The fans clarify the national unity of the Croatian diaspora: two right-wing nationalist football clubs and the associated neo-fascist fan groups show that they are separated in color but politically in line.

The neo-fascist Croatian diaspora in Australia did not miss last year in Bleiburg. The neo-fascist and vice-president of the “Croatian Diasporan Voice” John Ovcaric traveled to Loibacher Feld / Libuško Polje. Here he appeared with official invitation of the Bleiburger honor train as can be seen on a photo published by him on the basis of recognizable passports of the organizers. Finally, he was invited by the club to a joint meal as can be seen on the screenshot. For example, the Croatian-Australian delegation around Ovcaric and the Ustaša nostalgics of the “Bleiburger Ehrenenzuges” used the opportunity to network. Also, the chairman of the Graz branch of the neo-fascist micro party HČSP Vedran Radusić did not miss the opportunity to meet with Ovcaric in the shadow of the stage at Loibacher field / Ljibuško Polje.

The contacts between the Australian visitors and the organizers of the Ustaša meeting in Bleiburg / Pliberk are not limited to the visit of the former in May 2018, but are also maintained away from it. We have screenshots and photos in which the neo-Fascists John Ovcaric and Darko Darryl Orec visit in September 2018 to visit the member of the “Bleiburger Ehrenenzuges” Zelimir Kuzatko. Both Ovcaric and Orec can be described as neo-fascists as the photo shows, where they pose with an NDH flag. Kuzatko is also a member of the Facebook group of the “Croatian Diasporan Voice” in which he is also active. The chairman of the Graz HCSP and co-organizer of the Ustaša meeting in Bleiburg / Pliberk Vedran Radusic is also unsurprisingly active in the group.

This example shows once again how the neo-fascist activities at the Bleiburg meeting are not individual cases, but actively promoted by the “Bleiburg honor train” and its invitation policy.