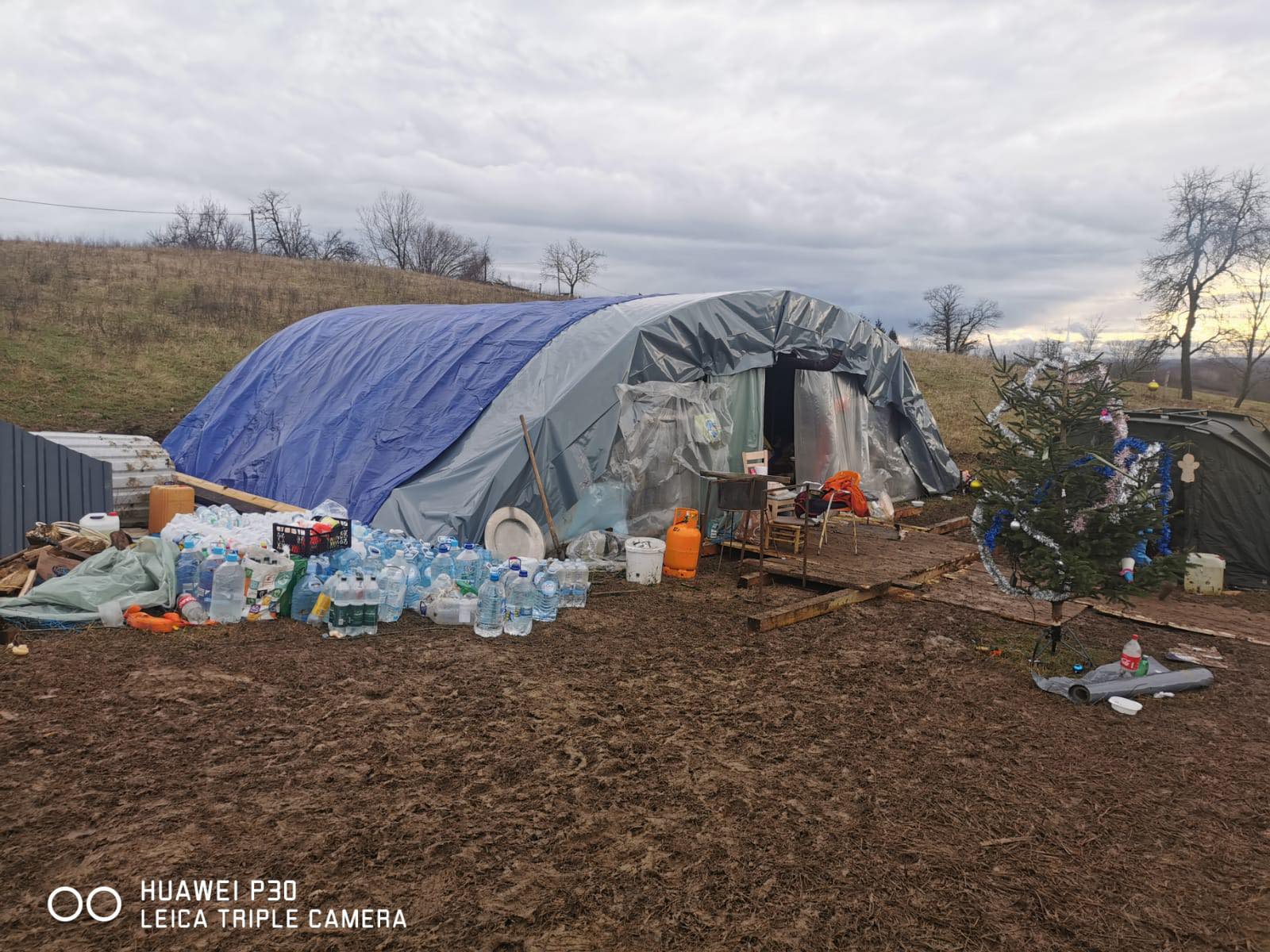 Stjepan Prašnjak served his country during the homeland war and in its defense became an amputee, but for Stjepan the war never really ended, the battle to build a nation and set down renewed roots on the generational Croatian blood-soaked soil of his forefathers, in the region between Petrinja and Glina, became a battle in itself.

Raising livestock on the land he had fought for, marrying, and raising a family of 12 children, his is but a single story among the thousands that could be told about the plight of our veteran’s post 1995, had the recent quakes of the past many days not come about, his may never have been known and we would have remained oblivious to it.

The quakes hit Stjepan and his family hard, luckily there were no casualties, but what they experienced, and the damage sustained by their meager abode in the aftermath must have driven deep the memories of 1990-1995 in Stjepans mind, his family home along with countless others in the region had either been totally leveled or left in such a state that any thought of habitation at this time were quickly dashed.

Stjepan and his family found themselves that first day carefully salvaging what personal effects they could from the remains of their home, the 14 of them standing alone beside what was left of it in extremely cold conditions with no immediate help. Stjepan took his military fatigues and pulled them on once again, perhaps in order to protect himself from the elements, perhaps as what he was witnessing was a new chapter in his struggle, a new battle to face and the fatigues gave him some comfort that he had faced many demons before, and this was but a new one.

As has been the case across Croatia where numerous veteran associations quickly mobilized to aid, one such association, the “Hrvatski Braniteljski Centar” spearheaded by veteran Ivica Borzić, quickly mobilized 17 of its members and made their way via convey to the epicenter loaded with whatever provisions they could muster. What they witnessed as they made their way through the region was utter devastation and one can only image how coming across leveled family homes and refugee survivors camped outside those ruins must have conjured up long suppressed images, they carried of their experiences almost 2 decades earlier.

It was at this point that they came across a number of families including Stjepans in a small rural setting and the instinctive pouring out of emotion for one of their own in particular started.

As Ivica explained to me via phone after 48 hours straight without sleep on the ground there “I don’t know where my head is, we came across this family of 14 alone and camped outside the remains of their home which looked like houses we had seen that had been leveled by artillery during the homeland war and it all became to much” “We offered to transport them to a makeshift refugee center set up in a disused army barracks that had been set up but Stjepan steadfastly refused saying that this was all they had, that the livestock he owned would perish if not tendered to, and they could not leave the little personal effects they had salvaged and which laid on the ground around them in fear that poachers would come and carry it away”

Stjepans family was one of a dozen in the immediate area that had suffered a catastrophic blow from the quakes, the scene of and around his home was the same among the other families, but this man had 13 other mouths to feed and shelter and his situation was and still is destitute.

Unlike Western countries, Croatia’s ability to sustain a response force of emergency services is limited due to their Governments mismanagement. While civil services such as the Police and Fire Services respond as best they can, it’s the civilian initiatives broadly based around the numerous veterans’ associations that quickly mobilise and kick into positive action to heed the call.

These pseudo response groups, such as the “Hrvatski Braniteljski Centar” are not bound by red tape and react in a fluid manner to the task at hand. As example, Stjepans family was now exposed to the elements, water, not food was their primary concern, and a lack of electricity in the region was having a drastic impact on all concerned.

The first call to action was procuring a tent large enough to house the entire family and their effects away from what was left of their home which was accomplished by days end with the families salvaged Christmas Tree propped up again outside the tent, secondly the issue of water for themselves and their livestock was addressed with convoys delivering what they could up until the point that local authorities stepped in and halted convoys from entering the quake zones. As Ivica explained the authorities didn’t have a grasp of what exactly was needed and started directing traffic as they saw fit.

Electricity was paramount, so a dash to Zagreb was undertaken to attempt to source a generator. It was a case of this person knows someone who has a friend whose cousin runs an equipment store, and so they managed to secure a brand-new diesel generator. The owner of the outlet at first advised that they could pay the $1,000.00 for the generator when they secured the funds, the next day he contacted them after receiving confirmation that the generator had arrived and was doing the job it was meant to and told the team that he was donating it free of charge to the effort.

We’ve seen the convoy of holiday caravans making their way from Istra being towed behind civilian vehicles, we’ve seen civilians on the ground working on shoring up buildings, but we have seen extraordinarily little in terms of civil intervention or Government officials heading out to remote areas such as the region where Stjepan and his family are and actually getting out of their vehicles to speak face to face with their constituents.

We need to ask why, and the answer is simply that there is and will continue to be a total disconnect between the common man and party hierarchy in Croatia, they dare not face the truth of the situation nor man up to what a person like Stjepan may have to say to their faces in front of a following film crew.

In Australia, if our politicians are not front and center within hours at a disaster epicenter, they are ridiculed and we call for their dismissal, this is Croatia’s political reality and highlights their inabilities.

The Croatian Diasporan social media groups here in Australia banded together on Thursday night and after a conference call decided that we would collectively band behind and endorse caritas Sisak Biskupija as they were the most prominent and active on the ground addressing the needs of the civilians on the ground.

In recent hours, general Glasnović has also given his support to them, as has Marko Franjević along with other prominent Croatians and diasporan organisations in Sydney have raised $500,000.00, so we feel vindicated in our decision to do so.

In Australia, “The Croatian Project” spearheaded by Lidia Kukulj  also launched a Go-Fund me initiative, this initiative is directly connected to the “Hrvatski Braniteljski Centar” and their efforts on the ground which are being coordinated with Caritasu Sisačke Biskupije’s efforts.

The “Hrvatski Braniteljski Centar” are now directly working in coordinating the emergency repairs to family homes in the region such as Stjepans and are coordinating with other Braniteljske Udruge who are providing structural work crews who will concentrate on shoring up homes and reinstating the basic structures so as families can once again inhabit them while they wait for any government assistance to rectify the remaining damage.

If you as I and many others are looking to assist financially, please keep in mind that there are few organisations that will directly assist the people affected on the ground in a timely manner so as to make an immediate difference and that by supporting the Caritas Sisačke Biskupije which is delivering broad assistance to the affected communities,  and the Croatian Project initiative which is assisting the “Hrvatski Braniteljski Centar” who are providing immediate infrastructure assistance to severely affected families in the more remote outskirts are honorable and cooperative options.

We live in hope that one days all concerned, and all affected by these disasters will be able to look forward to a better nation and opportunities and utter the words “When the war is over, these are my aspirations and hopes for the future” for now it is an ongoing struggle that must change.

2 thoughts on “When the War is over…”