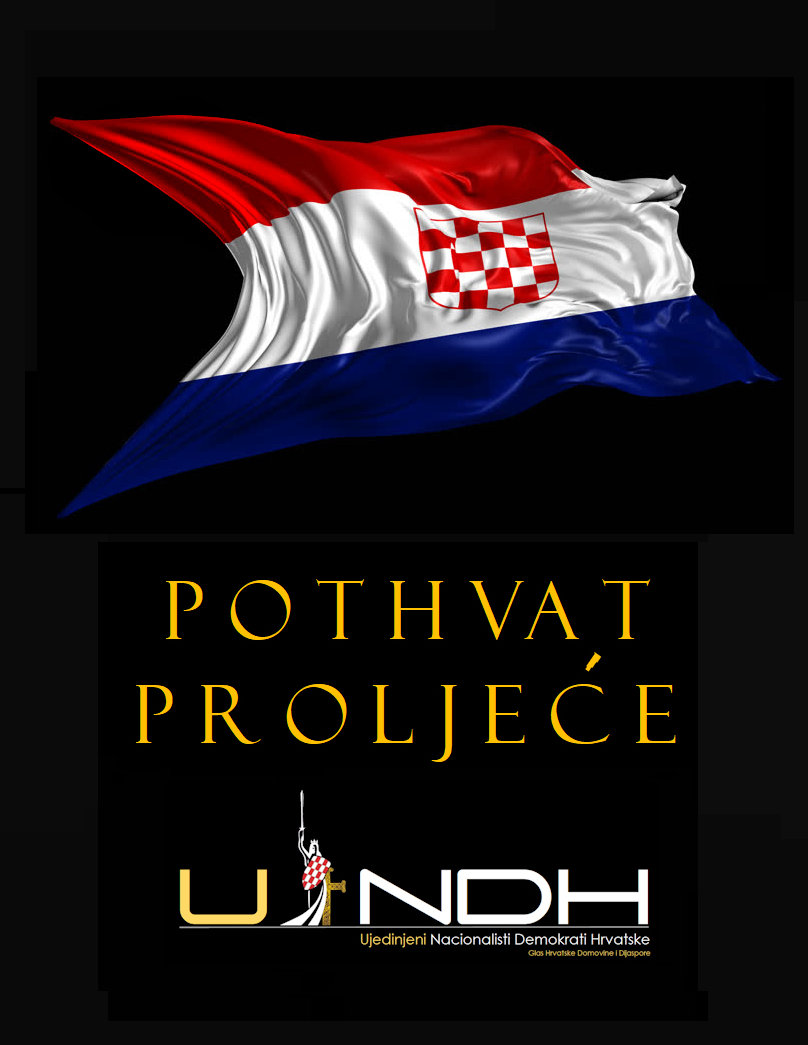 While we all respect the modern-day interpretation of the Croatian Republics national flag, for under it so many gave their lives in the defense and liberation of Croatia from tyranny during 1990-1995, we cannot forsake our true historical flag before those times which for centuries held us as one people, one culture, and one nation.

Having expressed our respect for the current flag for reasons explained, we must also state that the so called “Historical Flag” was the flag that was embraced by, registered with, and represented numerous political parties in Croatia. Under the same flag we witnessed Croatia’s declaration of independence proclaimed, it adorned the sash of then President Franjo Tudman, it rose again to its rightful place to the words of our anthem and a tearful jubilant public

Nevertheless, our ‘dragovoljci’ continued to adorn the original “Historical Flag” on their uniforms, and fly her as they entered battle. To this day many of our Veterans continue to carry her as so many more of their comrades gave their lives on the battlefields beneath her.

Whilst there are several forms of the Croatian flag, the current Croatian Republic flag, the flag of Herceg Bosna and other variants, the original flag is not as some may say, a mere historical flag or a flag of the diaspora rather the original flag represents every Croatian whether they come from the republic of Croatia, Herceg Bosna, Bosnia-Hercegovina, Vojvodina, Boka, or any one of the strong Diasporan communities found in Australia, USA, Canada, Germany or anywhere else.

The original flag represents ALL Croatians as it has for centuries past and in modern times with the rebirth of today’s Croatia.

UNDH today announce that it is time to unify all Croatians globally under this flag again, while respecting Croatia’s current interpretation of the Republics Flag and paying it the dignity it deserves, we also need to ensure that it never suffers the indignity our true unifying flag and coat of arms has suffered.

This initiative has been named “Pothvat Proljece” or “The Spring Initiative”

For this reason, UNDH calls upon all its members, and upon the Australian and global Croatian Diaspora to support this initiative to return her to her homeland, to provide our brothers and sisters with the means to honour her and join us by sending a consignment of flags to the homeland.

Production has commenced as seen in the video attached to this post, each flag will measure 90 cm’s by 150 cm’s and will be distributed across the homeland to fellow patriots.

To be a part of this initiative, we ask that you make a contribution, for which an official receipt and recognition will be issued by choosing one of the following options (All are listed in Australian Dollars)

These flags are currently in production and have been scheduled for delivery (We will not disclose when until they have reached the hands of our team in the homeland) and all pricing includes the negotiated production and delivery costs.

We ask that you do not delay in committing to this initiative.

Let us all join with those in the homeland who at this moment continue to defend our nation, our culture and rights, let them see that we exist (Da nas ima) and that the Croatian spirit in the Diaspora is as strong as it was in 1990, and as connected to our fellow patriots in the Homeland.

By following this link you can nominate your donation and execute payment immediately.

PLEASE NOTE: Although it asks for a shipping address, the flags will be sent to Croatia. By completing the shipping address, your details will not be published, this is however a non changeable feature of the platform which needs to be completed, you may enter a fake address so as to complete the transaction.

1 thought on ““The Spring Initiative””