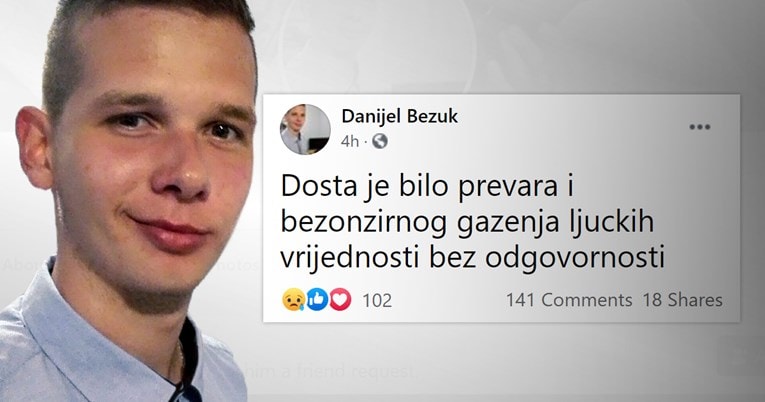 While George Floyd became a martyr in the eyes of the Black Lives Matter (BLM) movement, an afront for Antifa, how will a 22 year old Croatian man, barely at the start of his adult life be viewed by the Croatian public both from within and outside the Republic.

When I first heard the news late last evening, reports were sketchy at best, initial belief was that it was a disgruntled veteran of the Homeland war, and when I say disgruntled I phrase that along the lines of a justified veteran who along with so many before him that have taken their own lives had most probably decided that it was time to stand up in violent resolve.

All I knew by the time the clock turned over a new day here in the Southern hemisphere was that a male had carted a concealed Kalashnikov semi-automatic weapon within the parliamentary district alongside St Marks before firing the weapon first into the Government building before turning it on the Parliamentary building injuring an initially reported 3 security personnel just after 8:00am on Monday the 12th of October Zagreb time.

At that stage, he then turned and made his way away from the scene making it some distance before, as first reported, turning the weapon on himself and taking his own life.

This morning Croatian portal “Croatia Week” reported that Australian Croat and Zagreb based Lawyer, Don Markušić whose chambers are within the same area adjacent to the shootings provided comfort and assistance to a single Police officer who had sustained 3 shots, 1 to a limb and 2 to his torso. Don Markušić also recounted the events stating that his associate rang him from their nearby chambers. She advised him to take cover as a gunman was firing in the area and informed him that he had absconded from the scene heading north along Mletačka ulica.

Don Markušić advised that his first thoughts when he heard the commotion and shots was that the shots sounded like rubble being dislodged and falling as part of clean up work which was taking place in the area post the Zagreb earthquakes of some months back.

Don did the humane thing, and reached out to help a fellow man in distress, not knowing who the assailant was he thoughts would not have been focused elsewhere, but if only he had tried to follow Danijel and intervene, perhaps he could have saved Danijel and represented him which may have led to revelations and reconciliation.

Croatiaweek later advised the following “The Ministry of the Interior has said that the person who shot at a police officer outside the government offices in Zagreb on Monday morning was a 22-year-old man who a while later committed suicide at a different location and who did not have a police record” confirming he had taken his own life.

In a phone call with contacts in Zagreb only a few hours ago, I was advised, and this is not yet verified, that in fact the 22 year old did not take his own life and that his death was a result of sustaining 3 bullet wounds two of which he suffered to his back.

Social media as late as last night however had already identified the shooter as being the 22-year-old Danijel Bezuk from Kutina. On his Face Book page Danijel wrote the following aimed at the Government he would later attempt to take target at.

“This is the collapse of the nation. The collapse of us adults, the responsibility lays with each of us who silently accepts the imposed new norm. This is due to a nation that has been silent for years, and decades regarding corruption, nepotism, greed, incompetence, and resignation of the ruling caste, and their distaste and disregard for the welfare of our families”

What struck me was the level of frustration and pin point remark in Danijel’s parting words, these are not the ideological rantings of a paranoid extremist that span volumes of words as part of a pre-attack manifesto as we have seen in the past where mass shootings have taken place, but rather the paraphrased words of a collective nation.

Information, some of which may have been diluted or exaggerated as to who Danijel was is slowly emerging and making its way across the social media and spoken networks we all are a part of. So far word is that his uncle was a Vukovar defender who lost his life in that city’s defense during the homeland war, the children of this uncle, all adults now have left Croatia and are all reportedly living and working in Germany not having been able to make ends meet.

A further insight relayed to me today suggests that his family is related through Kumstvo to Vukovar legend Damir Markus, also from Kutina and that Danijel was more than often seen attending, participating and commemorating HOS related commemorations. The quiet type but openly patriotic and proud.

Taking all that I have gleaned to date, some of which may not be 100% accurate, my attention turned to the multitude on social media now posting condolence messages and memes remembering Danijel for what he undertook yesterday. A national pride is emerging out of this tragedy and the overwhelming but underlaying message is to me one of “You did what we all think, but you didn’t get them”

The answer is remarkably simple, and it was clearly obvious on news reports from the capital last night with politicians visibly shaken by what had unfolded. These untouchables as they have come to think of themselves were dealt a reality check, a member of the public they so willingly and decisively treat with distain, who they had never phantomed would raise a finger against them did just that, and in so doing, even with the tragic shooting of a Policeman who was an innocent bystander and only doing his duty, has woken a sleeping public and their opinion.

Had it been 15, 30 or even 45 minutes later, perhaps he would have met his actual intended targets face to face, we may never know who they were as individuals, but we certainly know who they collectively are.

Another line in the sand may have been cast by Danijel, one that others will now follow or voice in support, equally there will be those that attempt to pervert him, his intent and his affiliations so as to cast the shadowy questions that should and must be cast at them away and back onto him.

And now I sit and wonder, can and will Danijel be remembered and defended by our people with the same vigor and fortitude as George Floyd was and still is by the likes of Antifa and its marionette public identity in the guise of BLM. Will we see an outpouring of public protest asking this Government to be held to account as was the intent in Danijels passing words he posted? Will they take responsibility for the mess we have all collectively allowed to spread and rot across the floor of our parliamentary seats of power like some festering spillage on the kitchen floor we are not eager to address of tread upon?

And how will those that Danijel alluded to react? Will they attempt to character assassinate him, tie him in with extremists both real or perceived, and brand who he associated with as complicate and a threat to the state which must be addressed to preserve their ideal of democracy?

I’m sure Pupovac will at some stage emerge as the first of many from his hole and start beating his Chetnik war cries in condemnation of Danijel and any and every organization opposed to his doctrine.

Equally, those that stand up on the floor of the Croatian Parliament, or appear on TV radio or social media who momentarily stand to defend his views must, and I say must, be prepared to take this all the way until some resemblance of reconciliation and change manifests.

We may dislike BLM for all they represent and their falsehood campaigns, but we must admire their tenacity, if we had and displayed such the same, tomorrow the likes of Plenkovic and Milanovic would be made to publicly kneel on a knee in front of a national audience and admit, that they, their comrades, and all those that came before them have strangled our country to the point that no one can longer breathe, and I suspect what Danijel attempted to cry out out in his own parting words can probably be paraphrased as……….

“I can’t breathe!” “and neither can the country any longer”