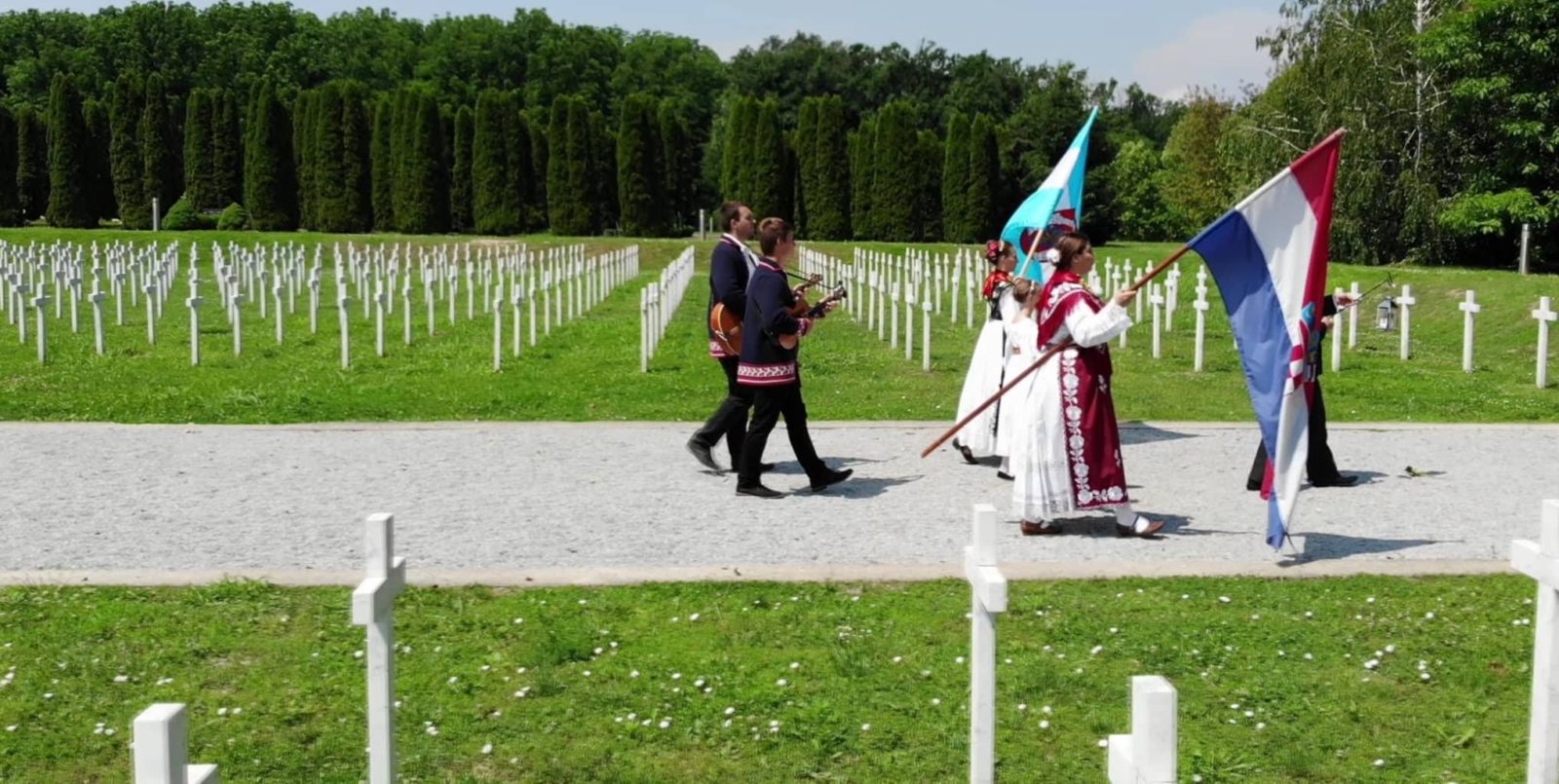 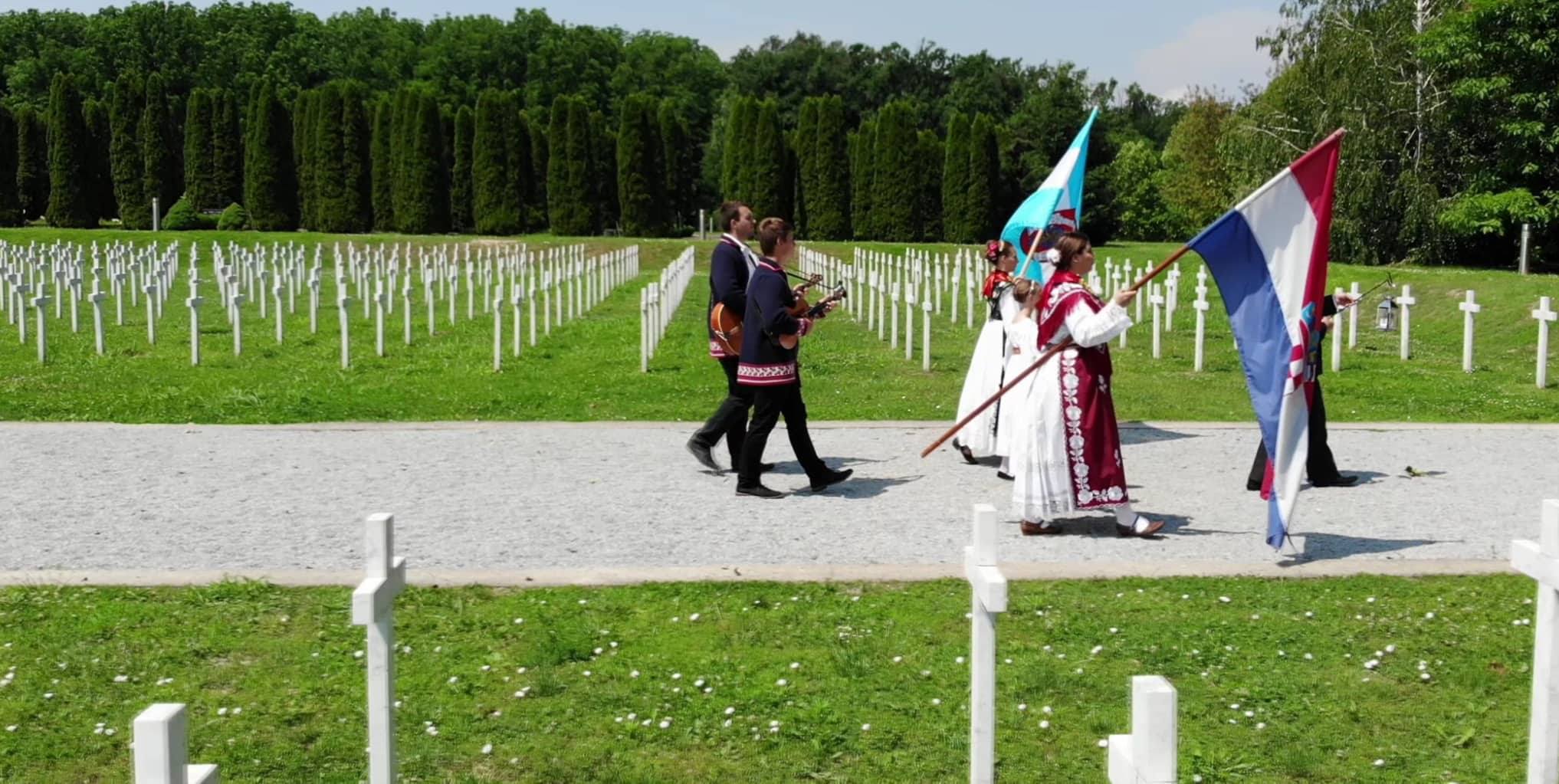 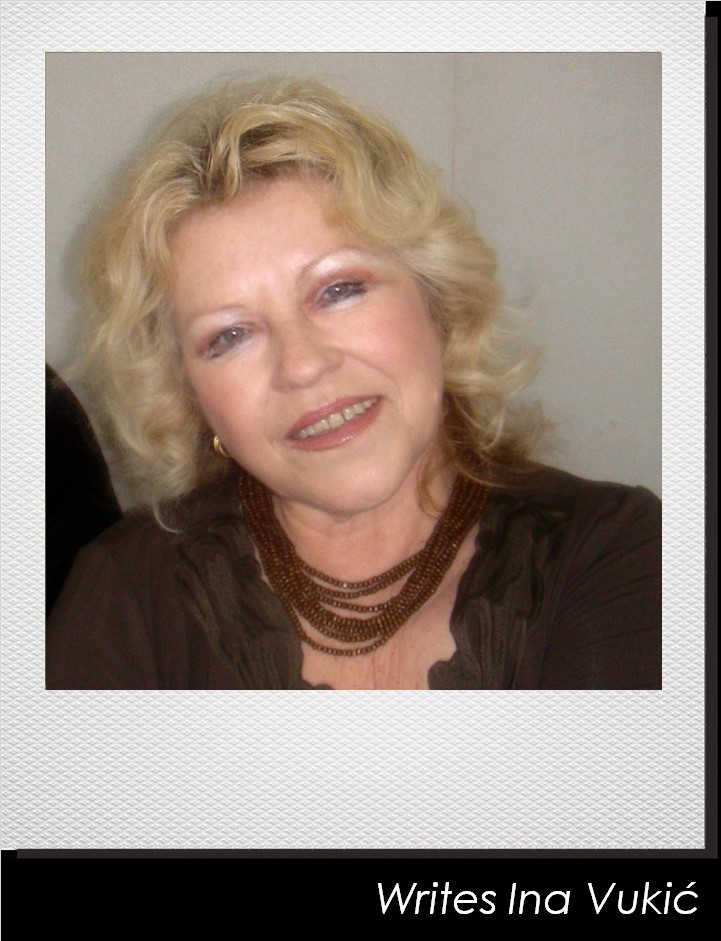 This weekend of 5th August 2018, like the same date days of past 23 years – as Croatia commemorates the 23rd Anniversary of military operation Storm, Victory Day, War Veterans’ Day and Homeland Gratitude Day – is sure to ruffle up many media pro-Serbian and pro-communist Yugoslavia feathers, dredging up persistently false Serb claims that 200,000 Serbs were forcefully deported from Croatia immediately after the successful military operation Storm, which liberated a large portion of Croatia from Serb occupation (self-proclaimed Serbian Republic of Krajina). The truth is that the leadership of the self-proclaimed Serbian Republic of Krajina had on 4th August 1995, as Croatian Operation Storm began, officially issued an evacuation order to Serbs in Croatia! Their own guilty conscience was behind it all, no doubt about that.

During this skilful military operation, Storm, protective of all civilian life including Serb, the Serb-occupied Croatian territory was brought back into the Croatian legal order, except for Eastern Slavonija, which was peacefully re-integrated later, in 1998. ‘Operacija Oluja’ (Storm) and ‘Operacija Bljesak’ (Flash), which was carried out in May 1995, were the critical military operations leading to the end of the bloody and brutal war of Serb aggression against Croatia.

Depending on the political spectrum people are in, the Official celebration of this Croatian national holiday, which happens every year in the Dalmatian hinterland town of Knin (the main site of events that occurred during ‘Operation Storm’) provokes passionate reactions from and has various meanings for different people, while Serbia mounts at the same time a day of mourning! The official memory of this military operation refers, as it should, primarily to the victory of the Croatian Army and its success in bringing back the occupied territories under Croatian rule. The narrative adopted by Serbs for their day of mourning rests upon false claims that Serbs were evicted from Croatia! Not even the International Criminal Tribunal for the Former Yugoslavia finding (2012 in the case of Croatian Generals Ante Gotovina and Mladen Markac) that there was no forceful deportation of Serbs from Croatia at the time has made any difference to this preposterous, scandalous claim. 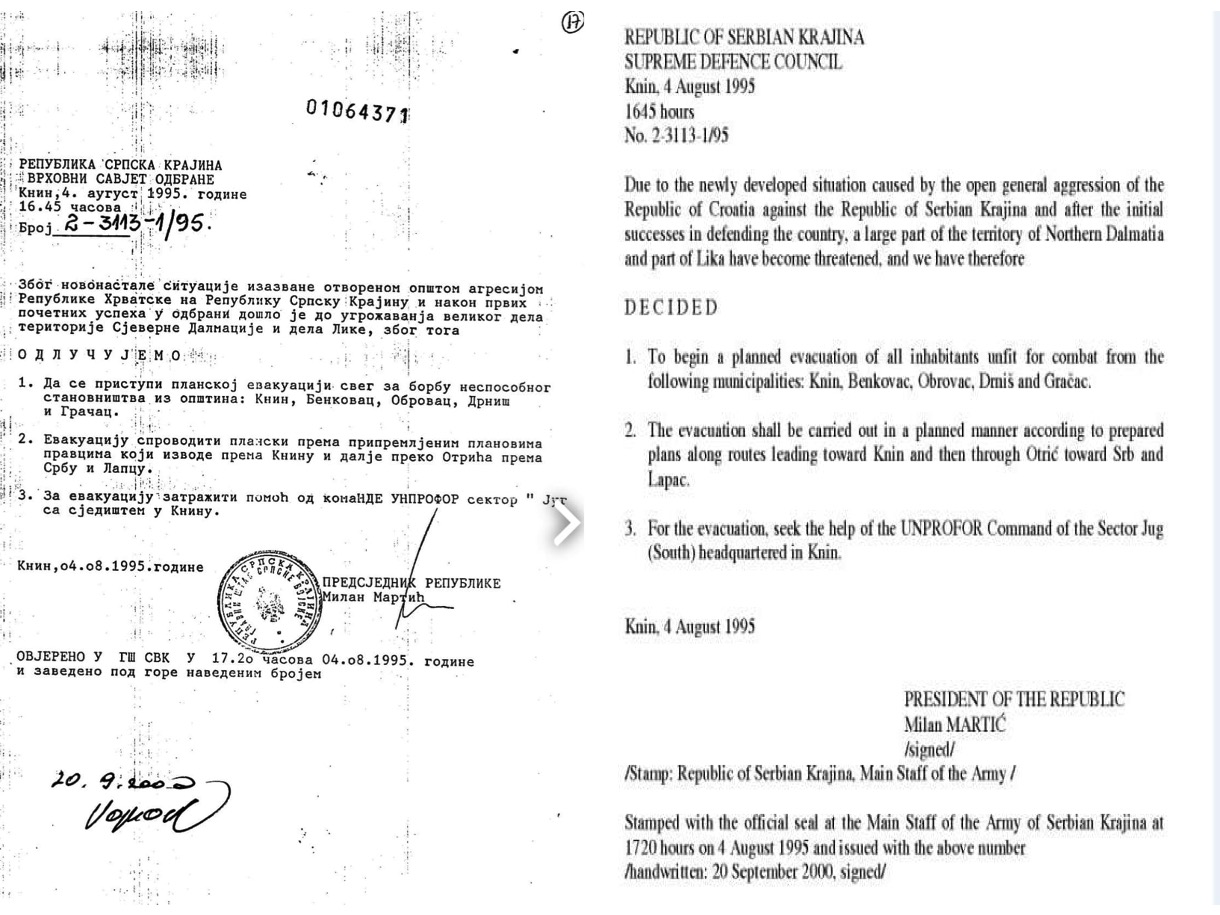 Serbs order their own evacuation from Croatia, 4 August 1995

On Wednesday 1 August 2018 Serbia’s president Aleksandar Vucic said to media that “unlike the hysteria that occurs in Croatia during the anniversary of Operation Storm, Serbs will mark our sorrow and tragedy and the calamity of our people in dignity…” Notwithstanding regretful cases of true civilian casualties in war (and in Srebian aggression against Croatia not all Serb civilians were true civilians, for it was the local civilians that often engaged in the killing, in the persecution and torture of Croat neighbours even before military aggression started), what kind of “dignity” can be attached to attempts to murder a nation, aggression, ethnic cleansing, rape, plunder…is only known to Serbs it seems. Those that support their deranged logic and narrative certainly, to my knowledge, have never questioned this!

In Croatia, commemorative culture regarding the 1990’s Homeland War has proved to be a platform for politicians to continue nation-building narratives and strengthen national identity. The associated and real sacrifice, real suffering, the real struggles against the mighty military of former Yugoslavia coupled with rebel Serb civilians who eventually formed military might of their own in order to stop Croatia seceding from communist Yugoslavia make Operation Storm all the more heroic for the independence of Croatia.

However, the former communist destructive forces, the so-called antifascists, persist as main barriers to and killjoys of true independence, which, if given a thorough chance, should have by now lustrated active communist heritage out of Croatian democracy. Hence, in Croatia, there also exist oppositional counter-narratives that challenge the truth narrative and are expressed through counter-commemorations and aggression-denial memorialisation organised by Serbia and the local Serb population in Croatia, and supported by a number of pro-communist Yugoslavia Croats!

This year a youth association who pursued the line that Croatia should apologise for its Operation Storm mounted one of such deranged initiatives. In other words, the misguided, but politically maliciously wired youth thinks that one should apologise for defending ones home and life from peril and brutal onslaught! Regretfully, the need to preserve own life and pursue freedom from communist oppression that forced Croatia to defend itself seems to have been forgotten by such sections with the Croatian society.

Croatians have nothing to apologise for when it comes to Operation Storm and every other military operation carried out in defence of the country! And on celebrating the liberation from local Serb separatists and their brutal allies from Slobodan Milosevic’s Serbia, one can with objective confidence say that Serbs are bitter and sorry that Operation Storm was a success, and for the failure of their plans for ‘Greater Serbia’.

Looking back at least since year 2000, when the former communists won government in Croatia, annual commemoration of Operation Storm victory have consistently been contaminated with implants of alleged war crimes by Croats during and after the military operation, with attempts and confabulations to criminalise Croatia’s Homeland War, with the agenda to equate the aggressor with the victim! During the period of Ivica Racan’s coalition government, from 2000 until 2003 (with Stjepan Mesic as the country’s president), the prime minister and most ministers avoided Knin commemorations, from fear of pro-West (democracy) policies gaining increasingly firmer ground in the development of Croatia as a free nation; free from communist Yugoslavia. Their main weapon, it would seem, was the fact that “antifascism” was, undeservingly, built into the Croatian Constitution as one of the foundations of the modern Croatian state, ignoring the Homeland War (the War of Independence) as its true and greatest foundation. The “antifascism” weaved into the Constitution was and is, in fact, the murderous and oppressive communism of Yugoslavia, not the antifascism the West has known in its midst! In 2004, the new HDZ government set the precedent that all of the top Croatian politicians (president, prime minister, and speaker of the parliament) should attend the commemoration in Knin, emphasising the importance of this date and place in the national consciousness.

Even though the HDZ under Ivo Sanader had taken notable steps at reaching out to Croatian Serbs, including coalitions with the Independent Democratic Serbian Party (SDSS – Samostalna demokratska srpska stranka), the victorious tone of the Victory Day commemorations invariably antagonised the country’s ethnic Serbs. By 2005 commemorations, it was clear that the pursuits to criminalise Croatia’s Homeland War via sending Croatian Generals Ante Gotovina and Mladen Markac to ICTY had indeed, in eyes of many, albeit unjustified, diminished the value of Operation Storm victory and several contested versions of that past had gained prominence as did antagonism within the Croatian society itself; part of which society are Serbs in whose interest it is to downplay the Serb aggression against Croats. The scenario continues to today, in one way or another someone somewhere attempts to inject the glorious and well-deserved victory of the Croatian military forces with poison – for political gain, undoubtedly!

In all that rather long while more than 1,700 mass graves of Croatian victims of communist WWII and post-WWI crimes in Croatia have been uncovered. The antagonism created around Operation Storm and Croatian Homeland War in general has helped and continues to aid the agenda that opposes prosecution, condemnation of communist crimes. If because of nothing else then because of that communist agenda the commemorations of Croatia’s 1990’s Homeland War need to escalate in their brilliance and shine – this freedom’s triumph must be complete. The completeness of freedom lies in determined pursuits to deliver justice to victims of communist Yugoslavia crimes. 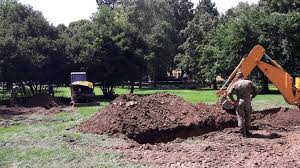 On Wednesday 1 August 2018 more mass graves of victims of communist crimes were unearthed, this time right in the middle of Zagreb, Savska Street! The human remains of at least 25 victims of criminal communist purges were found in two mass graves and one individual grave, located in a park in the Zagreb neighbourhood of Vrbik. Initial screening of the ground, using specially-trained dogs and geo radars, began after officials received information from the public that victims from World War II or the post-war period could be found there. Due to the large size of the area, the complexity and volume of work needed several phases of the investigation are planned.

This repeated horrific finding hasn’t been reported much in the mainstream media that seeks to cover-up or justify communist crimes. This latest mass grave finding occurred at the same time when former communists and Serbs are busy throwing vitriol at Operation Storm, still doing their corrupt utmost to deny the Croatian nation a deserved basking in the glory of Homeland War victory.

Croatia, indeed, must re-examine the nature of its commitment to freedom achieved with Homeland War. It must conclude that commitment to the freedom is, in fact, the strengthening of its national conscience and morality. In the context of Croatia’s peoples overwhelming resolve in 1990 to secede from communist Yugoslavia it is utterly immoral to protect any part of that Yugoslavia and especially its crimes against humanity.

Deliberate murder of innocent people and the oppression were wrong and remain wrong. Croatia must refuse to ignore or in any way appease the Serb aggression and the brutality of evil men and former communist regime. It must escalate condemnation and prosecution of communist crimes. It must clear these dark remnants of history that stifle freedom and progress.

1 thought on “Croatia – Freedom’s Triumph Yet To Rise!”