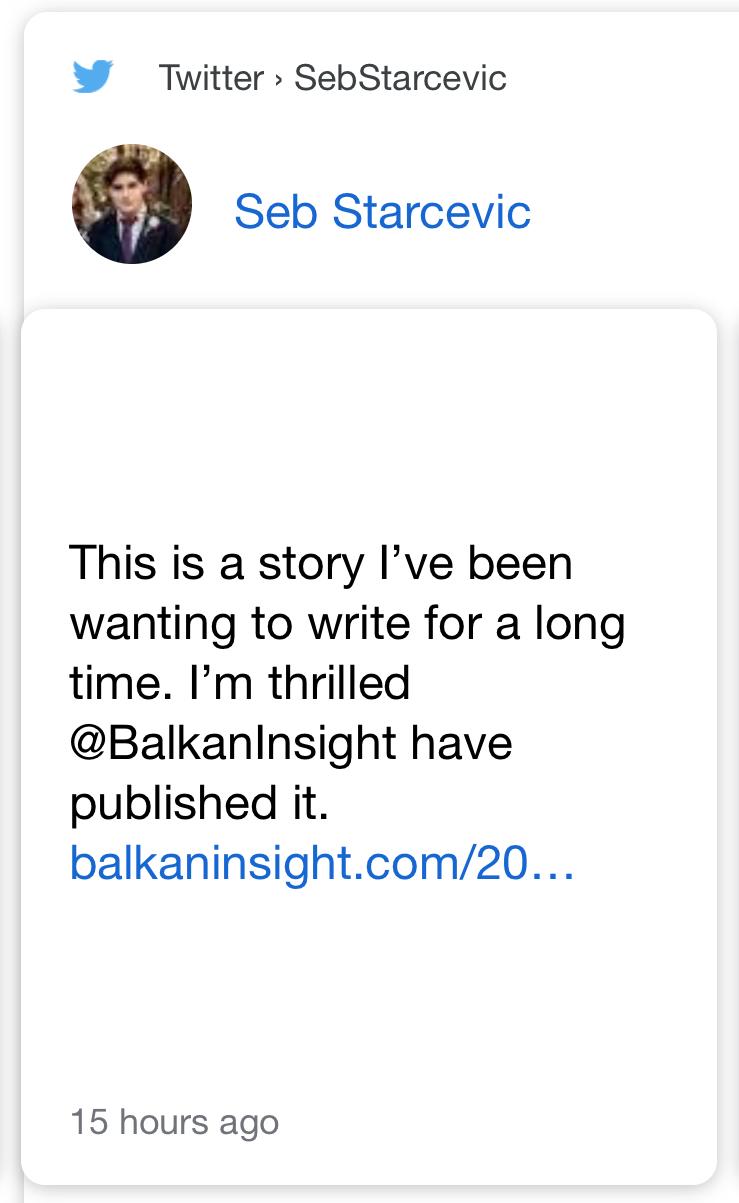 An interesting article written by a young Australian journalist, at least that’s how he promotes himself, once again attacks the Croatian Community in Australia. He seems by all accounts to be most satisfied with himself gloating on social media platforms such as Twitter that “This is the story I’ve been wanting to write for a long time. I’m thrilled @Balkaninsight have published it”

The following is the link to that article.

Social media is a very powerful platform Mr Starčević , but it is also like Bondi beach at the peak of the holiday and tourist season, covered in the electronic footprints left not only by you, but those you love.

Knowing you will eventually read this, I hope you don’t mind me sharing some of those footprints and Kodak happy snaps with our mutual reading public, after all, you had no issue collecting images and mentioning fine upstanding members of the Australian Croatian community in your article.

So, what must it be like being Seb Starčević , I’d say a bit confusing? Seb has a Face Book profile that is as secure as Fort Knox, unfortunately, one post with like’s reveals an encyclopedia of information as to his closest and dearest loved ones and friends, its just a matter of following the yellow brick road from there on in.

And surprise surprise, it seems that Seb parents may be on the wrong side of the fence, as far as I can tell Mitch and Elisabeth Starčević , who seem like loving parents raising a family in a happy well-adjusted environment may have an issue with one of their pride.

I would guess that Seb grappled with the title of his article “In Australia, some Croats openly celebrate fascism” and I say this because he uses the word “some”, and “fascism” If I’m correct I would suggest that the use of the word some was a subliminal concession considering the happy snap above where members of his own clan are seen at one of these so called “Croatian Fascist Shrines” for what looks very much like a celebration of sorts with someone who looks like patriarch Mitch at the microphone and matriarch Elisabeth alongside.

Fascism because once again association with fascism by the promoters of the revisionist history written by the communist’s post May 1945 is the essence of any argument raised against Croatian’s in this country, and the foundation of all arguments globally which condemns us all.

Personally, the reason I have reacted is because I was one of the key architects of the “Croatia Uncensored” tour mentioned, if you rattle the cage, you should expect a response Seb, and this post is but the start I’m afraid.

If your accusations don’t have the evidence to back them up, and I don’t mean the writings of communist minion scribes post 1945 or the falsified records of a Jasenovac memorial group, then I’m afraid that what you have produced is nothing less than regurgitated propaganda but more importantly a hate speech which the Australian Croatian community is not going to take lightly.

Every point you make can be counted with material which dismisses the propaganda of the past 70 years and is bleeding from the old archives like blood from a mortal wound, however, I’m not going to condemn you, nor personally attack you simply because I believe you must have had a very strong influencing factor in your life that led you to write your pinnacle article and push it through to a very dubious publication as you did.

It must be hard being Seb Starcevic, it might even get a bit harder for you if you are prepared to be a level-headed young man who can open his mind and investigate circumstances based on factual material. Material that was kept secret by those that produced an alternative story for the world and would have it believe they were righteous when in fact they were all and more in the characterisations they created so as to conceal their sins.

You see Seb, we are very much fed up with these attacks, allegations, and hate speeches that play on Croatian Diasporan’s and our loved ones in the homeland causing and resulting in nothing less than division and despise.  If you really believe that we as a group in Australia are our own worst enemies, then you fail to realise that your use of revisionist propaganda, is in reality, what stops us progressing. Every time we try to reconcile our past, a past we are prepared to accept for all its failings if it be proven so, we are stopped and by the same token we are denied the right to allow the mantle of falsehoods drop from our shoulders, a mantle that weighs us down as a people and culture that impedes our ability to move forward.

Are you prepared to go down the Rabbit hole with me Seb? Participate in a live debate, look within the Antifa’s Pandora’s Box that they so religiously guard from the world? Efraim Zuroff wasn’t game, but maybe you are, and perhaps you are yet to write an article of true investigative merit as opposed to summarised 7-decade old communist propaganda.

I await you RSVP Seb, you know how to contact me now, and while you’re here, feel free to browse our editorial section.

Ohhhhhh and yes before you label me one, let me save you the effort, yes, I am a descendent of Ustase, Ustase who weren’t members of the Nazi party, and were not fascists.

6 thoughts on “Being Seb Starčević”