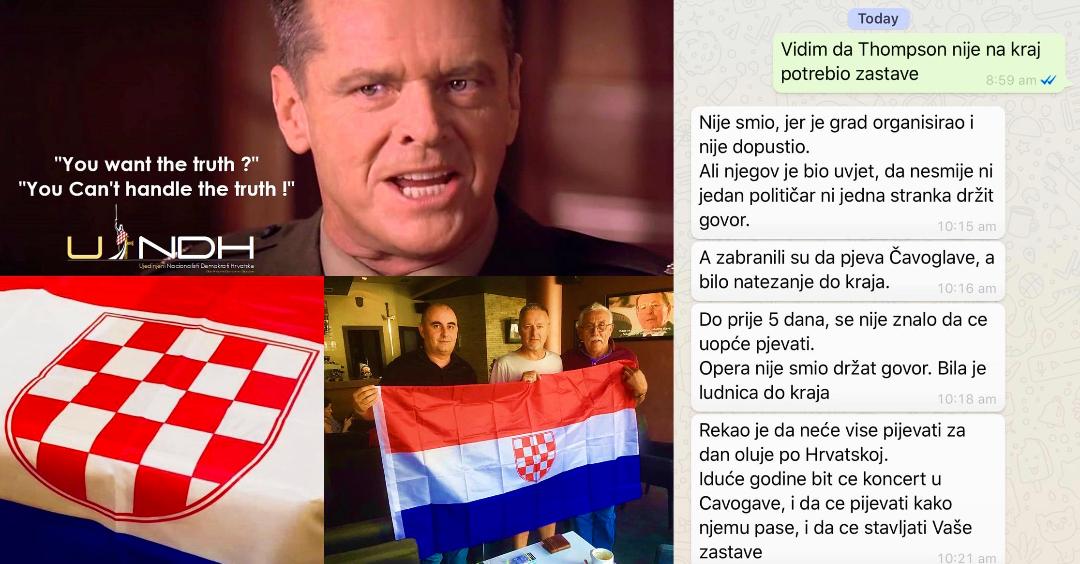 The next time you see a group of politicians stand up and lip synch to Thompsons “Lijepa li si” remember this, they are parasites that feed on one man’s popularity while propagating their own self-interests at either everyone else’s cost, or by championing the causes of others no matter how defamatory or damaging it is to our cultural being.

As you are all aware, and as the photo of a number of weeks ago portrayed, Marko Perković Thompson was photographed with one of our Pothvat Proljeće flags, it was one of some 25 in actual fact which had been handed to him in the lead up to this past weekends “Operation Oluja” commemorations.

What was the plan? Simple, have all 25 displayed around the stage and then handed out to the attendees towards the end of the concert, what transpired? Well the text above pretty much tells the story, but to the otherwise casual observer, to whom Thompson’s concert seemed like a great  success and tribute to our armed forces of 1995, in reality, it was a smashing success for HDZ and a slap in the face to every Croatian.

I’m waiting for someone claiming to be close to the source to come out and either water this down or give their opinion, sorry no cigar, the screen print of the text exchange via “WhatsApp” early this morning is from a source far closer than anyone here reading this may lay claim too, so don’t even contemplate trying to drag me down some self-righteous rabbit hole of self-promotion. Some of us are connected to the man and his inner circle, we just don’t advertise it for our own popularity, but on this occasion neither Darko nor I and the rest of the UNDH/GHD team are going to let this story slip and need to back up this insight.

So, who is “Opera” ? it almost sounds like an UDBA operative code name, as far as I’m concerned it is because the person in question, Andro Krstulović Opara is the mayor of Split and a life long HDZ man having served in different capacities with them since 1993.

Here is an insight into his background and career.

Andro Krstulović Opara was born on 22 May 1967 in Split. A graduate of the Zagreb Faculty of Humanities and Social Sciences from which he graduated in art history and archaeology.

A couple of points, considering his archaeological qualifications, and current studies in Building heritage, I’d like to send him a shovel to go dig up Jasenovac and copies of Damir Plavčić and Damir Marcuš’ memoirs of the Domovinski rat, all three may help him clear his head and gain a new perspective on what heritage and the preservation of it really mean.

He was elected to the Croatian Parliament at the 1990 first multi-party parliamentary election as one of the three representatives of students at the Council of Associated Labor (one of Parliaments’ three houses that doesn’t exist anymore), but in reality he represented HDZ Mladez (Youth of the Croatian Democratic Union) In 1992, he was named Head of Cabinet of the Minister of Science and Education, and in 1993 senior adviser to the Deputy Foreign Minister.

Between 1995 and 2000, Opara served as consul adviser at the Croatian Consulate General in Milan and in 2002 became a senior diplomat – adviser for the Croatian relations with Italy and the Holy See at the Croatian Foreign Ministry. Between 2002 and 2008, he served as a senior adviser – conservatory of cultural property at the Split Conservation Department of the Ministry of Culture. In 2008, Krstulović Opara become a senior curator and director of the Museums of Ivan Meštrović in Split and in 2015 adviser for social activities to President Kolinda Grabar-Kitarović. He was re-elected to the Croatian Parliament at the 2016 parliamentary election. At the 2017 local elections, he was elected Mayor of Split.

Adviser for social activities to President Kolinda Grabar-Kitarović, great we have a clear picture now.

So, what transpired, the text pretty much reveals all, so let’s put it into plain English

John:   “I see Thompson didn’t use our (Pothvat Proljeće) flags”

Response:        “He wasn’t allowed as the city (Split) organised the event and it didn’t allow him to”

“But they (then) banned him from singing (the song) Čavoglave,  it was a strain (between all) until the very end”

“Up to 5 days ago, it wasn’t even known if he would sing”

“Opera (Opara) wasn’t  allowed make a public address, it was a mad house till the very end”

“Next year he will perform in Čavoglave, and that he will sing (his songs) as it suits him and display your (Pothvat Proljeće) flags”

I don’t blame Marko Perković for not going ahead with the plan, at the end of the day this was about the veterans, about the triumph of a nation in 1995 and a crowd of some 50,000 people who came to celebrate these facts.

HDZ did not win the Domovinski Rat (Homeland war) it was won by the Croatian People, the Croatian spirit, and most importantly the Croatian men and women who served on the front lines either putting themselves in harms way or paying the ultimate price with their lives for the privilege the likes of which Kitarović, Krstulović-Opara, Plenković and the vast majority of the remaining war dodgers in our political system enjoy today at the cost of its people.

The Pothvat Proljeće flag is not a dissident flag meant to disrupt and cause grief, it had and still has every right to be displayed and respected at not only last nights event in Split, but at any event official or not.

Would I as mayor of a future Split, if circumstances changed ban the display of the current Republic flag? No, because it is part of the Homeland War as much as our culturally historic flag in retirement was, people died under it in the pursuit of liberty and freedom on battle fronts across the nation. Our culturally historic flag rallied Croatians across the globe for hundreds of years before hand to hold steadfast and true to their beliefs and determinations, it galvanised us here and, in the homeland, well before the graphic designer’s manifestation became todays reality.

Our boys from Grobnik were out in force again last night however with our Pothvat Proljeće flag’s, God bless them all, and I’m interested in hearing if Opara reacted to them? It would have been a leap of faith if he had.

HDZ is not Croatia, HDZ of today in particular, did not win the Homeland war, HDZ cannot claim this nor can it therefore promote the concept of privilege and the only party to hold the right to govern for life like some President Xi Jinping of China, nor Kim Jong-un Supreme Leader of North Korea.

It has an obligation to seek out the truth, lustrate, and fall on its own sword for its sins, it cannot be allowed to govern in totalitarianism, it is historically inept, counterproductive and anti-Croatian as it does not represent only Croatians who existed on day one of an independent state of Croatia in 1991, it represents every Croatian since day zip in history. Laying in an unmarked mass grave does not exempt any ruling political party from its obligations, it only solidifies them.

Respect is earned not assumed. If it hadn’t been for HSP and HOS at the very start, I’d dare say that Tudman and entourage would have flown out on “Croatia’s version of Airforce 1” in early 1991.

So, you want to know the truth? Question is can you handle the truth?

Things are not always as they seem.