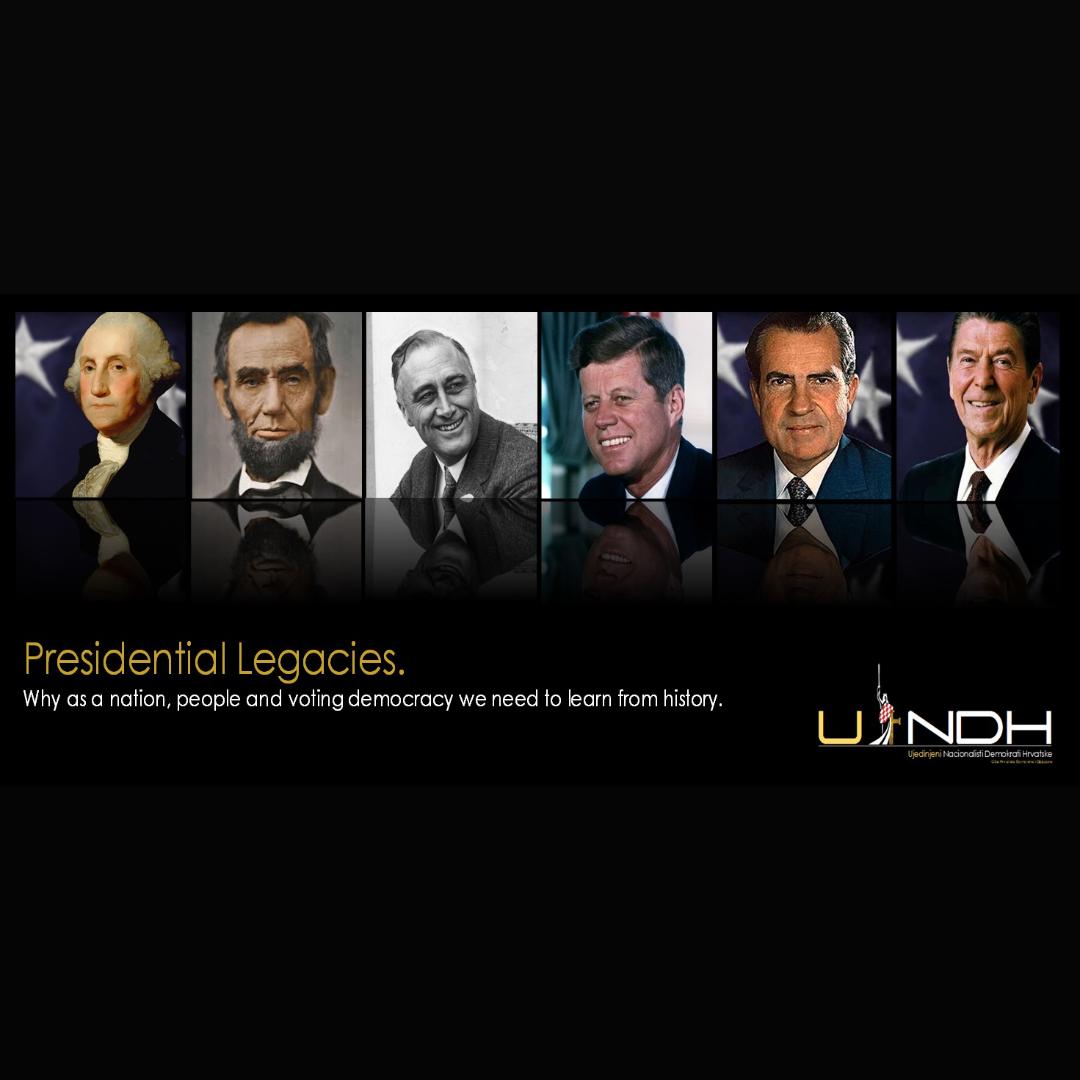 As Croatia heads to a new round of Presidential and Parliamentary elections, my mind continues to roam across Leaders in history who have influenced not only the course of their own countries, but the course of world events. In many instances, their decisions, many extremely hard in terms of moral position, were also ultimately fatal personally.

No matter how hard I cast my mind across the global community, no one country could provide more than what the United States has. Yes, we could isolate certain figures such as Mohandas Karamchand Gandhi (Mahtma Gandhi) as an example, or a Nelson Rolihlahla Mandela for his convictions, but few if any others come to mind.

This train of thought comes from a conversation I had with Darko Oreč  a week ago, his words in a reply to a topic we were discussing was the start of a journey my thought undertook thereafter.

“The actions of a President dictate how they will be remembered, either as a number in the line of personalities that held this role, or as a leader and commander that accomplished great achievement regardless if at the time it was ridiculed, or the decision was realised as being the right one at a later time”

“This is what it means to be a leader remembered, to have made the tough decisions at times of adversity for the good of all their constituents, past, present and future”

The epiphany? Not a single candidate to date who has announced their candidacy in the upcoming elections has made as close to a statement as Darko has, and if these are all we have to choose from then my friends, I can only say that they will be remembered as a number in the cascading number of nobodies the last three decades has delivered us.

I’ve picked 6 leaders from the United States that I have always held in high regard, in high regard not for all of their actions nor convictions, but because as leaders they navigated their terms and the issues they faced at times, shrouded in insurmountable pressure, where each and every decision they made carried possible consequences which would have turned the tide of not only their nations future, but that of a collective global community.

Washington (neither a Democrat nor Republican) led his troops in a fight for independence and prevailed later to become the 1st President of the United States establishing the foundations of a democracy which blossomed in the centuries to come. This was a general of the British Empire who faced certain death at the hands of the British for treason had he been caught, he could have easily guaranteed his future by aligning with them, but his convictions were greater than the sum of his prosperity if he had.

The then Croatian Republic City State of Ragusa recognised the United States as an independent nation of July 4th, 1776 and later sent a supply ship to the fighting Republicans in aid, I wonder what Washington’s thoughts were at the time?

Lincoln (a Republican) faced a Civil War which most will equate due to the abolishment of Slavery, there was much more to it than that, but nevertheless much of what he personally subscribed to as President, and the results thereafter, no matter how they sat with the public at the time did lead to reforms on a national and eventually global scale.

Soon after the civil war, a new centre was embarked upon to be known as Washington DC, the white stonework adorning the Presidential White House that gained the term from the stone used in its construction, originated from the Croatian Island of Brač.

Lincoln was eventually assassinated by John Wilkes Boothon the evening of April 14, 1865 at Ford’s Theatre in Washington, D.C.

76 years later to the day, a new leader arrived in Zagreb to enact the Independent state of Croatia after its declaration in his absence 4 days earlier.

Roosevelt, (a Democrat) A President who saw the winds of war raging in the late 30’s, who knew that at some point the USA would need to make a stand, but resisted forcing his nation towards its eventuality in light of the American public resisting involvement after the tragedy of WW1. It was only when they were attacked on December the 7th 1941 at Pearl Harbour that a sleeping giant awoke injecting itself into the conflict most definitely turning the tide of world affairs as a result.

Roosevelt however was not blind to what was happening in Croatia regardless of the fact that this small country had become part of the German Axis alliance as a result of the Serbian Yugoslav tripeptide collapse which ended in German forces invading the former Yugoslav territories. Up until the US entry into WW2 due to Japan’s attack, the USA maintained consulate staff within the NDH and OSS (Read CIA) files of the time indicate that diplomatic relations were civil and respectful between the two nations unlike Roosevelt’s recall of all consular staff from Belgrade when the Karadordevic regime was deposed.

Later with failing health at the Yalta conference, Roosevelt who had fought against Churchill and Stalin (due to their support of the Partisan’s) with regard to the post war rights of all nationalities within the region to self determination and freedom to rebuild their democracies as independent states realising Stalin’s ultimate objective died soon after. Had he survived perhaps the losses suffered by U.S. forces in taking Italy a year or so earlier would have not been in vain.

Kennedy, (a Democrat) From the time of WW2 until Kennedy’s assassination on November 22, 1963 at 12:30 p.m. (while riding in a motorcade) by Lee Harvey Oswald in front of the Dallas Book Depository, the USA had maintained a respectful stance toward all ethnic groups trapped behind the Iron Curtain of the then Communist Yugoslavia. All groups within the United states had contributed both to the Industrial and Economic growth of the country not only pre and post WW2 but also during the United States involvement in the conflict.

Croatians were considered as valued citizens of the nation equally alongside other Yugoslav ethnic groups and respected for their anti-communist stance. This at a time when the Kennedy administration faced a potential 3rdworld war due to the Cuban missile crisis.

For 13 days, the world held its breath as a stale mate developed between the United States and Soviet Russia and its main players, JFK and Nikita Khrushchev culminating in face to face talks between the two.

This President remains embedded in the hearts and minds of post WW2 Croats who lived through those days not only for his respect towards Croat’s particularly in the United States but for his fortitude in standing for the many European nations and their citizens either under threat or trapped in the Red Menaces grasp.

Nixon, (a Republican) A man whose intelligence was never realised by the world and who lived in the shadow of his contemporaries that came before him lived and led in a world of dramatically changing circumstances.

Remembered for his impeachment due to Watergate, he was also a man who 20 years before his time looked at the changing world around him and must have seen the future. With the Vietnam conflict now becoming a thorn in the side of the American public, not to mention the passing of the 60’s into the 70’s and a new generation very unlike their parents in attitude and thought, Nixon did not ride a wave of popularity as did Kennedy or Johnson before him, rather, he balanced precariously on a global tsunami.

During a reception prepared by Communist Party Croatian officials in Zagreb, the President of the United States exclaimed “Long live Croatia!” and additionally paying tribute to the Croatian nation and its people.

His speech was deliberate, and while many around the world had seen his visit to a communist nation as defeatist to the global anti communist cause, Nixon’s exclamation was seen as giving support to the embryotic movement toward democracy, to the Communist Tito and his henchman, the remarks were a bitter slap in the face particularly when their main objective was to promote Yugoslavia as a culturally unified and unsegregated ethnic entity in the world eyes.

And so, Nixon may as a result have spurred on Croatian nationalism which reached its pinnacle shortly after before being defeated by communist law makers resulting in jail sentences and a breaking of the Croatians will. But did it? Or did it only mean that it entered a slumber before triumphantly emerging again 20 years later and claiming independence 5 years later?

Reagan, (a Republican) Today we live with the Trump phenomenon, and while many follow the leftist presses crucifixion of him, it was no different for this President some 30 years earlier. He had hardly entered the Oval Office before he was marked as an anti-Christ who would drag the world kicking and screaming into a Nuclear WW3.

Yet he wasn’t just a Hollywood low ranked actor who had appeared from nowhere for the mere fact that he had spent a stint as Governor of California during which he Governed admirably.

For Croatian’s in the United States, a miraculous event occurred during that early term in state politics. Coincidently, on the same day Dr Martin Luther King was assassinated, April 4th, 1968, then Governor of California, later to become the 40th President of the United States, Ronald Reagan, met with HOP representatives in California to sign a proclamation recognising the 10th of April as Croatian Independence Day in that state. It is recognised as his first official act in the arena of world affairs, it was the start of a journey that would eventually see him in the Whitehouse, leading a cold war against global communism, and the eventual helping to liberate millions including those in Croatia, from its grip.

He was not forgotten by Croat’s and when his campaign for the Whitehouse began, they rallied to support him and in so doing supporting the events in the coming years which would culminate in Berlin and the words spoken by the 40thPresident of the United States

Arriving in Berlin on Friday, June 12, 1987, President Reagan addressed not only Berliner’s but a watching world at the Brandenburg Gate at 2:00 pm

Each of these presidents made difficult decisions, they addressed issues which were not popular, they grappled with so many possible consequences, but they did one thing that was mutual between them all.

They took into account the repercussions of those decisions not only on their contemporary constituents but also what effect these decisions would be on future generations while all the time looking back across their shoulders toward their contemporaries, not in physical terms, but in the spirit of how they had paved the way for their time in the light.

As Darko stated, we have obligations to the past, present and future, I ask which of this current crop of candidates can truly stand and say that they display and live by the same convictions, better still which of them has displayed or stated it.

I will let you be the judge and their future actions or inactions will provide the measure.