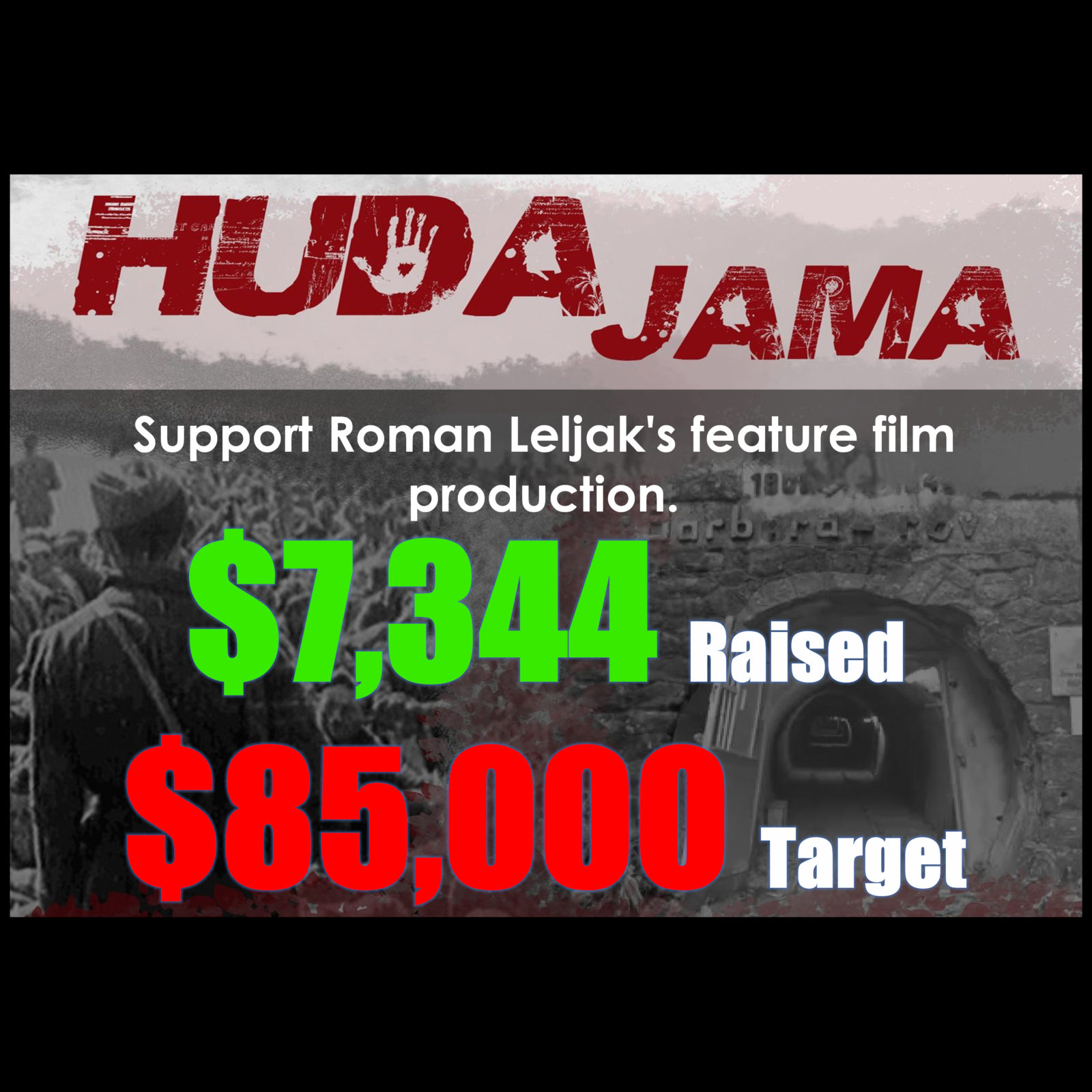 The following is the link to the “Go Fund Me”initiative for Roman Leljak’s feature film “Huda Jama” Please take the time to read the editorial below then click on the link to support this campaign.

A month ago, tomorrow, a “Go Fund Me” initiative was started in Australia to try and assist Roman Leljak in raising funding for a movie regarding the genocide committed at “Barbarin Rov” in 1945.

The location is commonly referred to as Huda Jama.

Unlike previous works by Roman, and numerous other investigative journalists and historians, which expose and document archival proof regarding the historical revisionism perpetuated by the Serbian factor and its allies. His efforts and those of his peers are overshadowed by the almost extremist narrative perpetuated by our foes in their encapsulation of the Serbian, Jugoslav, Communist lies that interlace to create a greater fabricated holocaust narrative.

Roman’s story will be a feature length mostly dramatic production which revolves around the journey of one individual from 1941 through to their tragic end in 1945 in Babarin Rov alongside the many thousands of others who suffered the same post their departure from Croatia to Bleiberg and then to their final resting places.

When Huda Jama was uncovered, and it’s atrocities seen by the investigators, in among the victims was a man who’s jaw still held a hidden secret, a gold wedding band on which his name was inscribed along with the wedding date 4th-12-1937.That date was St Barbara’s day, in May 1945 he was murdered and left to rot in Barbara’s Mine.

The film will be released in two versions being Croatian and English, and as Roman stated in a message he posted on my FB Socaial Media profile

The film is slated to cost AUD $850,000, (An initial estimate) or approximately €500,000, this is the starting point although Roman believes that realistically it will most likely be €1,000,000 or AUD#1,700,000 and is banking on covering the total cost shortfall through eventual ticket sales to its screening and funding from the sale of his own books.

So far, the Australian “Go Fund Me” initiative, which targeted raising 10% of the AUD $850,000 (or AUD $85,000) has only raised AUD$4,000 in four weeks, compare that effort against the bush fire relief initiatives of earlier this year and its pitiful to say the least.

Compare Roman’s budget to the budget of another Historical revisionist film currently in production by our foes across the Drina titled “Dara iz Jasenovac” (A picture of the films advert appears below) with a budget of €20,000,000, or AUD $34,000,000 dollars, mostly funded by the Vucic Serbian Government, and it all comes into perspective.

As Roman also pointed out in a recent Melbourne Croatian radio interview with Vlado Prša, in recent weeks, a production following the suppossed escapades of Diane Budisavljević, a propaganda tale of a woman who supposedly saved 10,000 Serbian woman and children from a NDH era concentration camp was facilitated and aired by both the RTS or Radio Television Serbia in conjunction with the Croatian Radio Television network HRT. The production was partially funded by the Croatian Government, here is a media release photo of its pre-screening, note the logo’s in the background.

The following is a link to the radio interview conducted by Vlado Prša on the 8th of September 2020 discussing the feature film with Roman Leljak.

As discussed during his recent radio interview with Vlado, while Roman’s film looks like receiving no funding from the Milanović, Plenković, Pupovac Croatian Government, including past or aspiring pundits, he will receive a nominal donation and facilitative assistance to do so by the Slovenian PM Janez Janša.It truly is a case of fiction denying truth once again.

While “Dara iz Jasenovac” perpetuates a lie based on a Communist era lie that there are literally hundreds of thousands of unsubstantiated Serb’s Jew’s and Roma buried within the boundaries of the former NDH labor camp, Roman Leljak’s film deals with substantiated and verified post war crimes against humanity in the form of 1’000’s of unearthed casualties of genocide and the many 1’000’s of remaining sites such as Huda Jama, already identified, but yet to be unearthed nor excavated.

Its seems that “Dara iz Jasenovac” will once again go a long way in the international community to strengthen this lie, for all intensive purposes, it will become the Serbian version of “Schindler’s List” and I fear how far back it will set our cause in establishing the truth about what Jasenovac really was and the factual enlightenment to the world that beneath its blood soaked soil lay Croat’s who were victims of post war Communist atrocities and not those of fictional casualties as perpetuated by our foe.

You only need to do a Google search of images (A screen shot below) to realise what the pages of production release images is doing to strengthen the lie while Croats are painted as murderous and genocidal.

Now image the impact once the motion picture is released and is supported with propaganda from the extremist Serb and extremist Jewish lobbyists who have become drunk on the perpetuated lie such as one Efraim Zuroff.

Monitoring the “Go Fund Me Site” I’ve noted with heavy heart that only some 35 people have donated, yet the initiative has had 459 shares. It boggles the mind as to what people are thinking, they are prepared to share the “Go Fund Me” page yet leave it to others to donate happy in the thought that they have done the initiative a service. Please refer to the following screen shot.

It doesn’t work like that people, being patriotic toward the campaign isn’t accomplished by sharing the initiative, and even in these hard times of C19, even a small donation adds up.

The “Go Fund Me” initiative, while initiated by me, is directly linked to the Roman Leljak association bank account of “Drustvo Huda Jama, Privredana Banka Zagreb” each donator and amount donated is provided to Roman and is transparently listed on the “Go Fund Me” site with donations being transferred into Roman’s association account.Romans recent radio interview is available as one of the attachements to this post.

If you take the time to read this to its conclusion, all I ask is that you pose the following question to yourself, “When Dara iz Jasenovac is released, and the deluge of anti-Croat propaganda starts, will you remember Roman’s film that failed to materialize”, and that you may not have contributed to !

When that happens, and before you start posting protests across social media “Will you feel a sense of lost opportunity?”

If so, don’t complain when “Dara iz Jasenovac” starts receiving international media attention, for we are to blame for allowing fiction to deny truth yet again.

For those that have yet to see what horrors awaited the team that uncovered the site, the following footage taken by the team will drive home the magnitude of the genocidal act. Please donate via the link at the start of this editorial so as their story can be told.