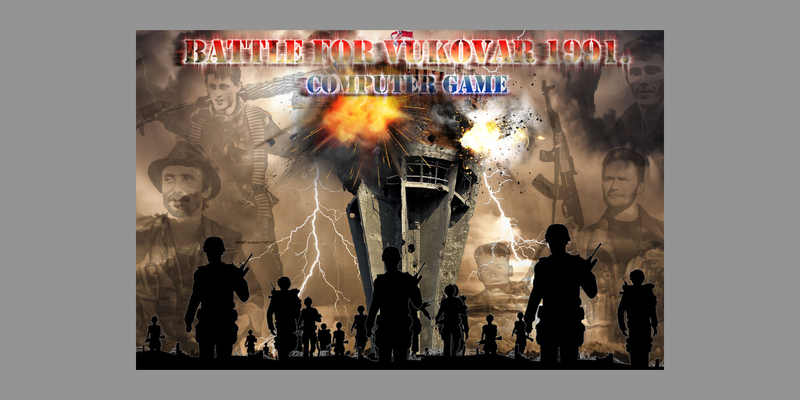 As parents, we’ve watched our kids grow up playing video games we all lined up for at at our local EB Games outlet at the ungodly time at the stroke of midnight. If your collection includes all 10 Call of Duty versions, you will have forked out some $1,000 since 2004.

Such is the impact these games have that they can become addictive and are mostly based on sensationalist concepts conjured up by game designers, a multi-billion-dollar business where only the most compelling experiences guarantee market share, however, how much is fact in these games, and what is the lasting impression or lesson learnt from being exposed and emersed by the experience they provide?

It is exactly for this reason that Damir Plavšić became involved with a group of younger Croatians from the Slavonski Brod region who a few years ago began story boarding and creating the crucial pathways needed (Known as game levels) that would form the basis for a realistic and historically accurate emersion of a potential player into what was the battle for Vukovar during the Croatian homeland war.

The intent is simple, if we cant get our kids to watch video’s or heaven forgive, read a book on the subject, and, if we have a Government hell bent on not allowing the full facts or alternatively, a well-watered down version of them to be made available to school aged children, then what the hell did our troops fight and die for, or, we as diasporans from that time, strive to support in every imaginable way?

The reality is that we are well behind the eight ball in this respect compared to the mob across the Drina, they have already been pedalling their own gaming versions of the Vukovar campaign building up hatred and portraying Croats as blood thirsty Ustase and themselves as liberators.Not that there is any truth in either portrayal of their game narrative.So, the concept of a Croatian born educative game took flight and some 6 weeks ago Damir first contacted me asking if I knew of any Australian based gaming engineers which unfortunately I didn’t.

Nevertheless, Damir persisted making contact with, and advertising globally for volunteers to come forth and heed “The Croatian Call of Duty” and guess what, it went viral.Gaming designers, coders, renderers, and all manner of tech savvy Croatian Diasporan youth from the likes of Chile, Argentina, Canada, and the United States heeded to the call, and among them all, an 18-year-old from Brisbane Australia named Dominik Milicevic also reported for duty.

What is amazing here, as Damir explained to me this morning, is that this young man has now become the chief gaming engineer in this entire enterprise and is heading the game rendering for battle for Vukovar. But there are issues, to be able to render the game scenes and levels, you need the performance and memory capacity of 10 of your top end home PCs to accomplish this task, think 30+ GB of RAM, and processor power that would make your home PC set up look like Hyundai Excel compared to a Tesla.

And while Dominik is battling on with the job, his laptop just doesn’t have the capacity to accomplish the job in a time effective way without crashing continuously. We will get back to Dominik in a moment. So, the concept here is simple, a game version of the battle for Vukovar that incorporates historic battle footage and images of the battle front and our defenders.

One of the first levels would potentially revolve around Luka Andrijanic from Velika Brusnica near Bosanski Brod, who shot down the first JNA aircraft in the Homeland War at the moment that the very battle for Vukovar Vukovar started.The introduction to the attack on Vukovar took place on August 24th, and will be forever remembered for Luka Andrijanic, who shot down two JNA planes that day. Luka Andrijanic was killed in action a month later on September the 20th.Darko Galic, a founder of the original project narrated the levels or stages of the game which are now being embellished with additional details from Damir Plavcic and the surviving defenders from the battle, a battle that didn’t last 88 hours, but rather 88 days.

Even though the defense was eventually lost, it was far from a defeat and as U.S. General, Norman Schwarzkopf stated sometime after Vukovar’s fall, he was amazed by the reports and the tactics used by its Croatian defenders and that this campaign would be reviewed and studied by U.S. officers at The United States Military Academy West Point for decades to come as an example of what a small defense force could achieve in light of an overwhelming invasion force both in terms of manpower and firepower.

As Damir Plavcic said to me over coffee in my lounge room in 2017 during his visit to Australia, “ If we hadn’t held Vukovar for that long, and given the Croatian armed forces time to strengthen with the support of Diasporan donations and funds, Vukovar wouldn’t have been the last target and the whole of Croatia would have ended up becoming a shattered Vukovar overnight” Therefore, it was a victory at great cost but also of greater determination to hold ground as long as possible.

So the player will be emersed in a briefing story and historic visuals at each stage or level providing the story as it unfolded and then taking up the character to replicate the accomplishment, Luka Andrijanic’s name, actions and sacrifice will become immortalised and known by thousands at a time and his story will be told and handed down by old men in 50 years’ time to their grandchildren long after they put their Xbox or PlayStation controllers away in a draw for the very last time.If this is the degree, we need to go to preserve our history and the memory of our defenders and their battles, then so be it, we are after all in a digital age.

Funding – The curse of the Croatian story because there is never enough of it and it’s the common man, not the authorities that stand behind these initiatives to preserve and honour.

So, what to do, and what of Dominik, the young man who applied directly to the team in Croatia and has proved to be an invaluable asset in this all?In Australia there’s a saying, give an Australian some paddock fencing wire, a pair of pliers and some gaffer tape and he can almost accomplish anything, in this instance, our Australian born Dominik needs much more than that and the success of this project is on a razor wire balancing on the performance of an ill-suited laptop and Dominik’s patience.

The final game is envisaged to become a free platform for users, its not an enterprise for profit, its an enterprise for truth and the preservation of the memory of Vukovar’s defenders, so if as I you wish to assist with this project, and help a young Australian Croatian accomplish something amazing for both his people and himself in his chosen career, dig deep and lets join together to sponsor a proper platform for Dominik to accomplish his mission.

So How to assist Dominik, the boy from down under who is having such an impact on a narrative far from where he grew up ? He has provided me with the specs and retailer we can source the gear from and its just a matter of pulling our proverbial fingers out.

We need to raise $2,700.00 to get him the battle hardware he needs to complete his Call to Duty, So I personally will be pitching in with $700.00 to get the ball rolling, and I’m asking other Australian Croatians to pitch in the rest, so if you find this a worthwhile cause, please contact me either via Face Book, a message on this article, or via my email at john.ovcaric@me.com

Here’s to Dominik and the entire game development team, and maybe, just maybe, today’s Croatian gaming youth will become those old men telling their grandchildren about the battle for Vukovar based on their emersion in a game decades earlier.