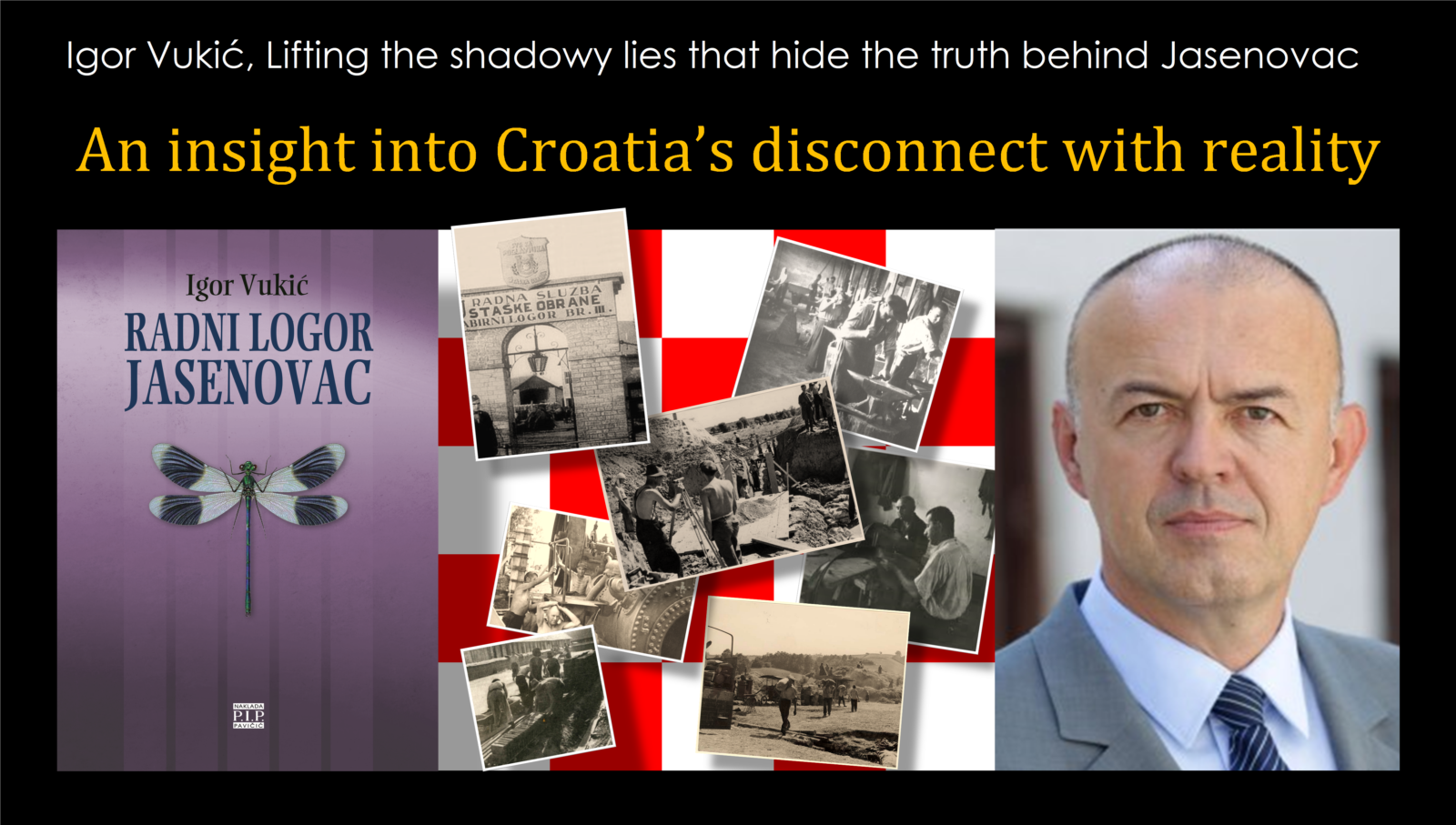 These centered around his intended activities in Australia, a criminal conviction that has no basis and finally his alleged revisionist activities and supposed hate speeches.

He was flown home at his own cost at 12:15pm the following day

Igor Vukic and Roman Leljak were this last week scheduled to appear together at Croatian centres in Canberra, Sydney Melbourne and Perth, however Leljak (As he has put it) found himself being escorted hand cuffed at the arrival gate by Australian Border officers subsequently spending 5 ½ hours being interrogated based on accusations tabled by an unknown source.

Following Velimir Bujanec’s similar plight a fortnight ago, a recurring theme is developing which the clear majority agree is reminiscent of the plight of Croatian immigrants 30 plus years ago being the discrimination against and the proliferation of propaganda at any attempt to what I recently termed the struggle to question the historical revisionists activities of Tito’s Communist Era historians post May 1945.

While even the mention of NDH today fires up both sympathetic and alarmist reactions among the Croatian community here, but more so in the homeland, the reality is that the NDH era topic is core to the work of both Leljak and Vukic, and as such that any media coverage connected to their efforts, as in the case of Bujanec, is quickly also challenged resulting as an example in the cancelation of his entry Visa by Australian officials.

The Croatian community here have no issue with Australian security channels doing what they do best by negating any threat or socially negative entities entering Australia, however, we would expect that the vetting process would be fair,balanced and executed to the highest degree when dealing with questionable material supplied anonymously over a web site.

Equally, it is not unreasonable to expect that not only would an incoming visitor be treated with a degree, (in Roman’s case a recently elected municipal official) of dignity when being met at an airport air gate and that reasonable explanation would be provided substantiating any decision revoking their entry, Roman leljak was not afforded any of these courtesies.

Igor entered the country some 12 hours after Roman and was not impeded in any way from continuing his visit among Australian Croatians, attending the Croatian clubs of O’Conner in Canberra on Friday evening, Punchbowl in Sydney on Saturday evening, and the Croatian Catholic centre in Sunshine on Sunday afternoon. As I wrote this he was travelling to Perth to complete his obligations.

We have all watched either recorded or live address from Vukic over the past many months where he presents factual evidence from not only archival documents, but numerous eyewitness’s accounts in his investigations into the Work camp jasenovac.

In his film, Mit u Jasenavcu, Roman leljak links Igor’s work by presenting evidence that then takes the raw numbers claimed by the revisionists of Communist Era Yugoslavia that supposedly met their end in jasenovac,  and through official archival documents, illustrates that in many cases, alleged casualties attributed to Jasenovac  are actually attributable to, among others, the Sajmište concentration camp located at the former Belgrade fairground site in Serbia.

Before I speak further about Igor and some of the insights gained this trip, it is important to mention several key people that continuously help facilitate our numerous guests ongoing efforts and visitations, namely people like Nikola Babic of Melbourne, Marko Franevic of Sydney and Anne Dujmovic in Perth to name a few among many individuals and likewise Croatian associations.

Yesterday I, as I am sure all others, felt great pride when Pero Gelo introduced Igor to our Melbourne audience. He welcomed our Croatian Brother of the Orthodox faith to Australia, and when we consider that Igor (Born in Croatia) comes from a mixed religious family where his father is Orthodox, and the fact that Igor places great significance regarding his quest to seek the truth due to his father’s guidance and insights as a child, we must appreciate that in these times where many Croatians shun away from our historical heritage, Igor exemplifies what being a Croatian true to our forefathers really is.

I asked Igor a few questions this trip, and the first was personal to say the least, I asked him to tell me about his father. Igor explained that he was a Police officer prior to 1990, and early on urged his young son Igor to consider that the allegations of what occurred at Jasenovac were not factual as Igor’s father had not only been raised in the town but had spent time there himself

Years later when the Domovinski rat broke out, Igor’s father took up arms in defence of his homeland and remained a proud branitelj of RH up until his passing a short while back. His father and mother both had concerns when war was evident on the horizon, unsure how they would be viewed, yet his father’s convictions not only about Jasenovac, but about his love for Croatia was unequivocal, I’d say this has had a profound impact on Igor’s convictions also.

I then posed the question to him as to what the overall effect has been on the population with regard to the volume of work both he and Leljak have undertaken and brought to light.

Igor reflected for a moment before telling me of a high school student who had attended one of his lectures, the student along with his classmates had listened attentively to the hour-long lecture and shortly after approached Igor.

Igor was impressed, however realised through further conversation that this student while have an interest in history really didn’t have any emotional ties to the truth that unfolded in Igor’s writings.

As Igor went onto explain, while our youth, who are the countries greatest hope in the future, wish to explore our history and understand what occurred, they are disconnected for lack of a better term.

And here in our conversation continued, this disconnect with our past is our greatest disadvantage, while there is a compassion to a degree for what happened, 2 even 3 generations under communist then non reconciliatory governments post 1991 have literally erased the collective memories and emotions of our nation, to them these are stories, not life related incidents that can be pinpointed to the struggles of their families post 1945.

I mentioned to Igor that the families and descendants of the Jewish Holocaust can literally explore the names of family members who perished during world war 2 and much like the names used by the Antifa based Jasenovac foundation this went a long way to creating a direct connection with not only descendants but the general world public of today.

He agreed, this is the missing link, as many of our people today experience an emotional and ancestral divide and cannot equate our krizni put with their own circumstance. This in turn greatly diminishes the impact of his work, Leljaks work, and those of countless others such as Kuzatko, Jurcevic and many others.

He confirmed, that a vast collection of details regarding the personnel that made up the columns of 17 HOS divisions that turned toward Bleiberg, and countless others who never made it across the borders in those final days in May 1945 exist, and that that they could possibly be brought together so as every Croatian could trace the movement and possibly final moments of their distant relatives of that time.

This my well stem the disconnect which is the greatest threat to the work being done by our investigators and historians today, it is not unlike the disconnect that is happening less than 2 generations after the Domovinski rat of 1990-1995 of which Damir Plavsic and Damir Marcus constantly emphasise also.

And if we take heed of what General Zeljko Glasnovic has stated time and time again, a man cannot move forward unless he looks behind, we cannot improve unless we have learnt from the lessons of the past.

I am blessed to have been able to spend time not only with the likes of leljak, Jurcevic, Sunic Kuzatko and Glasnovic in the past year but also Igor Vukic, and I can only wish that every Croatian could spend a day with any of these inspirational people as I am certain that as a result the disconnect we suffer would quickly subside.