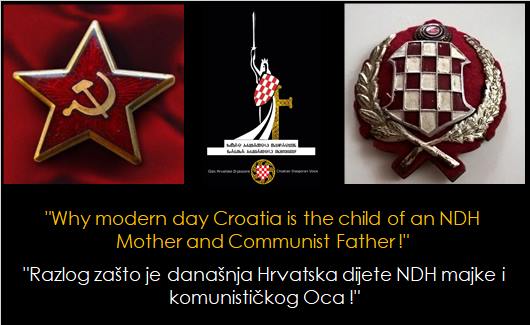 The modern day Croatian Republic increasingly struggles with the realities of its past present and indeed future, this in recent days can be seen with the visit of Serbia’s supreme leader (I dare not call him a President as this is too stately an accolade) Aleksander Vucic, the diplomatic disarray shown by our leadership, and the outcry from all quarters of Croatian citizenship questioning not only the Presidency but also our true identity as a nation.

That identity can be pinpointed, but the reality is that today’s modern republic is the bastard child of an unlikely couple and this has led to the identity crisis it faces and accordingly that which its citizens and the Diaspora face.

The war of 1990 – 1995 brought together two very unlikely entities, those that could be categorised as communist regime Croatians of the old Yugoslavia, who would at worst describe themselves as ex-socialists under a new democratic banner, and the offspring of the NDH (Independent State of Croatia) era both within the country itself but to a much greater degree in the Diaspora.

If we consider the main political parties that had a greater influence as the war of independence played out, two clearly stand out, obviously HDZ (Croatian Democratic Party) but as importantly HSP (Croatian Party of Rights) for the simple fact that it formed and decisively influenced the outcome of the war through the military success of HOS.

While HDZ represented the legitimately appointed political party elected by the nation, it was HSP that represented the nationalistic hopes and aspirations of decades long subdued nationalists both within and outside the nation during the Yugoslav era. HDZ was in essence a compromise, while it weighed heavily upon the nationalistic desires and hopes of a nation to regain its identity, it needed to walk a tight rope between what many saw as a flawed era in our past being the resurgence of Croatian statehood during 1941-1945, creating a safe haven for those that had been aligned to the communist era regime, and finally satisfying the expectations of other nations it was relaying upon for recognition and what their expectations were of this emerging republic.

As weak as this child was at birth in 1990, it could not have survived had it not been nurtured by its strong nationalistic mother, that mother was directly the offspring of the NDH and by the time 1995 and Oluja (Operation Storm) played itself out the communist father to use an analogy “Deserted the mother and absconded with the child”

It is for this reason that today we find a nation at odds with itself, bitterly divided, profoundly militant toward its leaderships policy, yet subdued by economic hardship that dictates just how boisterous and outspoken it can be, it is a child with an identity crisis which must be resolved once and for all.

As I have written previously, post May 1945, the majority of Croatians immigrated to almost every capital city worldwide, they had either lived through the war, survived the krizni put (Forced march), or had been children who either experienced the war or its aftermath, they were witnesses to the atrocities, they had experienced the resurgence of Croatian statehood and culture albeit for only a few years after centuries of sublimation.

They preserved what the NDH had delivered to the people in those times and the NDH and its leadership was respected for this above all else.

That passion to renew did not die in the mass graves of Tito’s design and direction, it escaped, it flourished, and it worked collectively and in a unified manner awaiting, planning building for the day when Croatia would once again become the NDH or Independent State of Croatia.

The painful truth is that today’s Croatia is the child of the NDH that had preceded it, it was the children of the NDH and their children who came to the call when the time came, and the nation rose wearily from its knees and required support. Before that it was these individuals who set matters in motion internationally so as when the war started for independence a city like Vukovar would not be sacrificed in vain nor would that city become the flash point nor end of the dream.

If Croatians had not kept the fire lit and alive in the Diaspora, the dream of an Independent Croatia would have died with them as they had represented a Croatian statehood in exile that continued while a nation was incarcerated by a totalitarian regime hell bent on killing it.

The history of the NDH, what it truly represented, and the determination of those in exile became the umbilical chord when the child was conceived providing not only fiscal support but having also laid the foundations politically and culturally within their adopted nations over that 50 odd year period, guaranteed recognition of the republic.

The child has been betrayed, and only by reconnecting with it maternal past, reassessing its morals, and disinheriting its father can it ever hope to regain its identity and guarantee its future.

This can only occur through a protest by the child in the ballots, a sweeping change in the political balance towards a nationalistic government which puts the nation and its people as the first and only priority in its decision making process, where legislative change removes the economic shackles its citizens endure and allows for true democratic reforms and lustration which was never delivered after the conclusion of the war of independence in 1995, without these occurring, the child will never gain a true identity nor future and will always be conflicted by its past.