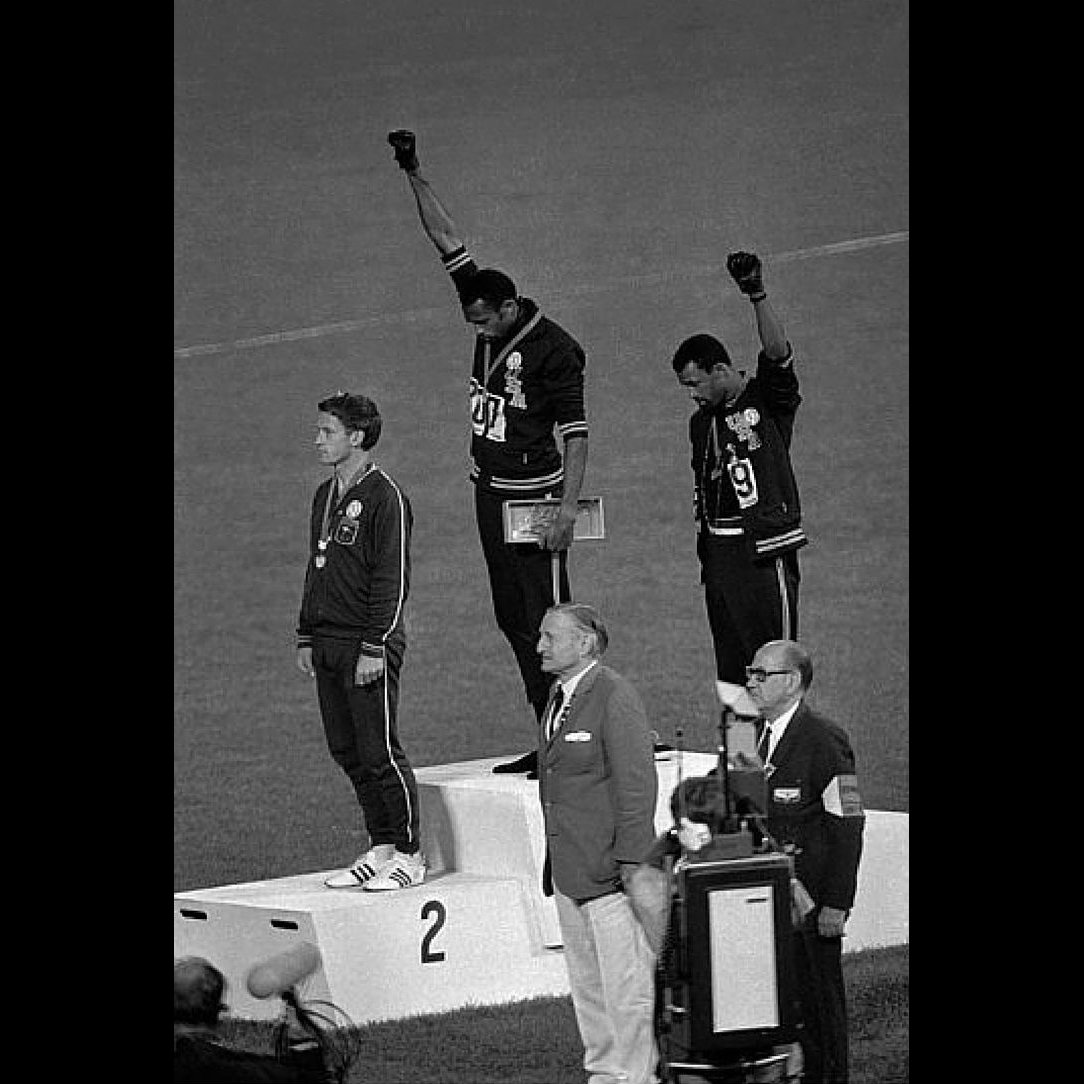 From the outset, it needs to be said that the death of George Floyd was tragic, a view echoed by almost every commentator, but the ripple effect his passing left is unfathomable.

I’d like everyone to take a long look at the photograph accompanying this rant, for those that are unaware of its historic meaning, and who may be too young to remember, here is a history lesson.

The 17th of October 1968, Mexico City, two black Americans, Tommie Smith and John Carlos, gold and bronze medallists in the 200m made history at the Mexico Olympics by staging a silent protest against racial discrimination by standing with their heads bowed and a black-gloved hand raised as the American National Anthem played during the victory ceremony.

The pair both wore black socks and no shoes and Smith wore a black scarf around his neck. They were demonstrating against continuing racial discrimination of black people in the United States.

As they left the podium at the end of the ceremony, they were booed by many in the crowd.

At a press conference after the event Tommie Smith, who holds seven world records, said: “If I win, I am an American, not a black American. But if I did something bad then they would say ‘a Negro’. We are black and we are proud of being black.

“Black America will understand what we did tonight.”

That evening, the silver medallist in the 200m event, Peter Norman of Australia, who was white, wore an OPHR badge in support of Smith and Carlos’ protest.

But two days later the two athletes were suspended from their national team, expelled from the Olympic village and sent home to the United States.

Although many felt they had violated the Olympic spirit by drawing politics into the games, upon their return both men were welcomed as heroes by the African American community while others regarded them as troublemakers. Both received death threats.

Thirty years after their protest, the two men, who went on to become high school athletics coaches, were honoured for their part in furthering the civil rights movement in America.

1968 was a time of world unrest, a time most probably laced at the mid-way point of epic battle between democracy and communism on a world scale, a time when racial discrimination not only toward the people of numerous African nations, those of that lineage, or indigenous cultures of darker skin, were caught within a struggle within many western nations which had a white, or apartheid  policy, towards them. It was a time not long after the loss of JFK the 22nd of November 1963, and his successor, President Lyndon B. Johnson the following year on the 2nd of July 1964, signed into law the historic Civil Rights Act in a nationally televised ceremony at the White House.

The same year as the Mexico Olympics, Martin Luther King’s dream ended when on the 4th of April 1968 he was lost, and not 2 months had passed when Robert Kennedy joined him  on the 6th of June 1968, apart from Johnson, all three were murdered by an assassin’s bullet. Richard Nixon came later, but as early as 1957 he had helped shepherd the Civil Rights Act of 1957 through Congress.

These men were republicans, and democrats, and by the same token neither for their contribution toward change was based on moral and nationalistic grounds, they indeed wanted to make America great.

During this decade of turmoil, of protests against American involvement in Vietnam, the civil rights movements, the countless deaths of Politicians and everyday black Americans at the hands of extremist anti civil rights groups and individuals, the country held together and did not implode. Yes, there were cases of violence at protests, but such cases were very much a result of the passions of either side towards each other.

White Americans marched along side Black Americans in support, an Australian athlete at the Mexico Olympics stood at times head lowered after he realised what his two Black American competitors had undertaken on the podium behind him, at that moment, he bore the brunt of white humility globally on that podium when it should have in fact been his time to celebrate. Later he paid homage to them as was previously described, he actions of recognition I am sure had a profound effect on Australian’s back home who for the next many decades would still find the topic of Indigenous civil rights a bitter pill to deal with.

What of all this? What lessons have we learnt from the past? What lessons need to be applied now ? not only with regard to the unrest in the United States, which has manifested itself in places such as London, and my own city of Melbourne as I write this.

The lessons we need to learn from the past are lost, in those times it was protest in order to obtain equal civil rights, not civil privilege, there is a vast differential between the two, and what we are seeing in the United States, and for that matter Globally is just that.

Croatia is not impartial to it, but rather than the fight taking to the streets in clear view, it is masked within the political system.

Let me explain, Milo Yiannopoulos or pen name Milo Andreas Wagner, a British far-right political commentator, polemicist, public speaker, writer and activist who also happens to be gay (And I ask that you don’t hold that against him as he is openly critical about the gay rights movement) openly challenges popular contemporary thought when he describes the tactics used by the global left which manifests its self in anarchist groups such BLM and Antifa. He vocally states, in my paraphrased way, that these groups prey upon minority group issues, openly support each in their claims for apparently their version of what their civil rights are, yet pigeon hole and segregate them so as to maintain tensions while outwardly supporting each.

His argument is therefore “If these so-called campaigners for minority civil rights across diverse groups had the best intentions toward each, then why are they not brokering a coming together of these two groups, along with many others, so as to calm tensions between them?”

The answer is very simple, these groups are sustained by turmoil and unrest, they use these issues to their own advantage in order to propagate “Civil Privilege” as opposed to “Civil Rights” at the cost of a nations, and for that matter a Global balance and order within societies.

Let me pose this question, Brits and Australians have or are about to protest in support of the situation in the United States, why don’t we see them protesting in support of the Citizens of Hong Kong? I’d like to see Australian State Premier, Daniel Andrews of Victoria, march with a 100,000 other Australians with lifted Umbrellas, but somehow because of his current problem regarding his co-operative stance with the Chinese Government, I doubt he would.

Civil Privilege is causing all manner of issues in the West, and across Europe, and Croatia as we know are not immune to it, Civil privilege, or the smoke screen it is, which enables groups as I have previously mentioned, to cause Civil unrest is a contradiction.

The greater contradiction here is how political parties further exaggerate the situation. Take the Democrats in the United States, their pandering to these groups “RIGHTS” is pure contradiction, why didn’t these groups protest against the Democrats when the Obama administration poured millions of American dollars in what I call subsidies to the likes of North Korea and Iran, two totalitarian governments with clear human rights violations towards minority groups the anarchist movements campaign against ? yet they are ready to bring down Trump and his administration who have clearly rescinded Obama’s money for peace initiatives which only allowed each of the mentioned regimes to consolidate their positions.

The Democrats, now in opposition take the stance that “Mine enemies’ enemy is my friend” in relation to these groups.

In Croatia, civil unrest is non-existent apart from the whispering mouth to ear between the silent majority, and the occasional public display of defiance by raising our historic flag, or exclaiming the words “:Za Dom Spremni”

Yet Croatia, with its Parliamentary structure which caters for influential seat numbers bestowed upon minority groups, its pandering to a totalitarian phenomenon such as the EU, and allowing itself to be stripped of all it hard earned national pride and culture are in no way different to the Democrats of the United States. And this can be seen by the open support of Trump by everyday Croatians who ask the question “Where is our Trump?” be they right or wrong in their observations.

Croatia as much as the United States, and a vast sway of European countries still within the EU, resemble a layered cake, at the top either Political parties in power, or in opposition who for their own reasoning and survival pander to anarchist groups. The next layer these anarchist groups who infiltrate social arguments such as Civil Rights, Minority Rights, Climate Change Activism, sorry I meant to type Privilege not rights after each of those, and fan the fire of public opinion for their own leftist ideological outcomes. And then finally, the public which acts as a crusty base to the cake who are duped into the fray.

But there is one more element to the cake, the burning candle with its own agenda, one which many attempt to define, one which certain faces have been associated to, a group of mystical figures pulling the marionette strings of each layer for their own devices.

What Smith and Carlos, along with Norman of Australia did was to send a peaceful protest to a world audience, one that helped change and civil rights flourish in their respective nations. Their acts were not aimed at promoting Civil Privilege at the cost of democratic rights where all that anyone wanted was for all men and women to be treated equal with a common mutual respect for their race colour or creed.

The candle is burning, and with it the world may burn also. So, in 2020, we need to ask the question with regard to the current situation at hand, which I am sure will be followed by a new issue once it subsides, “In 2020 is Black the new Black? Or just a darker shade of Red?” and by Red I mean the leftist resurrection and the use of it by a phantom deep State movement that isn’t so obvious?